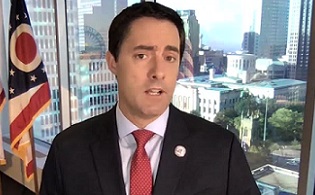 Secretary of State Frank LaRose traveled Tuesday morning to the Hamilton County Board of Elections in Norwood to instill the public’s confidence in elections.

He watched election staff sort ballots as they audited the 2021 election. It’s a routine procedure that has drawn much more scrutiny in the past year in light of former President Donald Trump’s false and debunked claims of a rigged election in 2020.

As the sound of papers being shuffled filled the large room, LaRose stood before a placard stating “Security, transparency, integrity” and told the press Ohio’s elections are safe and secure.

But when asked by The Enquirer whether he believed Trump won or lost the 2020 election nationally, LaRose didn’t give a simple answer.

“I can speak for Ohio,” LaRose said Tuesday. “I can tell you President Trump won a decisive victory in Ohio, in fact, a record-setting victory. Nobody has ever gotten 3 million votes in our state history.”

LaRose voiced concerns about “last-minute changes” being made by courts to the election process in some states, though he didn’t cite specific examples. He did dismiss false conspiracy theories about bamboo ballots from China and “secret algorithms.”

“Under the rules in place, President Biden won,” LaRose said.

Does Trump bear responsibility for undermining people’s faith in elections?

LaRose didn’t call Trump out by name. Instead, he called out Georgia Democrat Stacey Abrams for not conceding the 2018 Georgia gubernatorial election. Abrams was the only politician he criticized by name.

The purpose of Tuesday’s visit was to highlight the routine audit process conducted by each county board of elections after an election. Election officials across the country have tried to reassure the public elections are accurate and secure.

“We do electronic tabulations so we can give you those results on election night, and Ohioans want to know, ” LaRose said Tuesday. “But we also have a paper trail for every ballot ever cast. Let me emphasize there is a dead tree, wet ink copy of every ballot cast at every county board of elections…We can go back a few weeks later and do the post-election audit. That is what you see happening behind us.”

The Hamilton County Board of Elections still gets requests from citizens wanting an audit of the 2020 presidential election, elections officials told The Enquirer.

The board of elections did audit the presidential election, as each county does every election, and found the results 100% accurate, according to the Ohio Secretary of State.

But, on average, one email a week comes in from someone asking the board to look into the 2020 results, said Deputy Director Alex Linser.

As audits for the 2021 election begin, Secretary of State Frank LaRose has traveled the state to highlight the audit process.

He’s not singling out Hamilton County. He appeared last week at the board of elections in the Republican-leaning Muskingum County, a county President Donald Trump won with 69% of the vote.

Every board of elections in the state is required to perform an audit after each election. It involves a manual recount of ballots in randomly selected precincts in certain races.

“The purpose of this, and the purpose of doing it in public, is to show everybody they can have confidence in the results published on the board of elections site are in fact the results of the voters intent on Election Day,” Linser said.

Trump’s false claims of a rigged election in 2020 have elections officials across the country trying to reassure the public. Elections officials nationally have faced threats; earlier this year the Justice Department announced the formation of a task force to protect election officials.

LaRose has defended Ohio’s election process, including 2020, calling that election “the most successful election we’ve ever had.”

Democrat Chelsea Clark, a councilwoman from Forest Park, is also running for secretary of state in 2022.

How November’s election will be audited

So how does the audit work at the board of elections? It involves a roll of the dice.

Elections officials rolled 10-sided dice to determine which precincts get ballots counted by hand. The hand counts are matched with the results from the electronic tabulations. They will audit the races with the top three vote totals in Hamilton County, two issues and the Cincinnati School Board race. The two issues were Issue 1, which was the Children’s Services levy, and Issue 29, the Great Parks of Hamilton County levy.

It will likely be completed by tomorrow, election officials told The Enquirer.

In presidential election years, the presidential races are automatically one of the three races that get audited.

This is not the only safety precaution. In close races, the board of elections does a recount automatically when the margin of difference is 0.5 percentage points. This year, the Hamilton County Board of Elections recounted ballots in eight races across the county with no change in the results.

“I think there’s definitely an effort of election officials throughout the country to showcase the procedures and security procedures in place to ensure an accurate count,” said Hamilton County Board of Elections Director Sherry Poland.