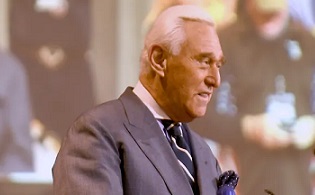 “They have a positive outlook and offer encouragement,” Fodor said. “They talk about unity and for us not to be afraid.”

Flynn and Lindell were two of the dozens of speakers featured at “ReAwaken America,” a nationwide speaking tour that’s making a two-day stop at Trinity Gospel Temple at 1612 Tuscarawas St. W.

“One of the concerns I have is I see so much evil today,” said Fodor, who is Catholic.

The tour — unabashedly pro-Christian, anti-mask mandate and pro-Donald Trump — is the brainchild of Flynn and podcaster/entrepreneur Clay Clark.

At one table, Raegan Williams, Autumn Petersen and Shawna Sundberg were making the case for the Rev. Niel Petersen, a pastor and Iraq War veteran and his independent campaign for governor.

“The Constitution was founded on biblical knowledge and the truth of God,” she said. “There’s been a loss of what our country was founded on. It’s not about taking back but exemplifying what we believe.”

“There’s been a lot of encouragement to stand up,” she said. “I think what’s rising up is the Spirit of 1776.”

Flynn, who appeared on the stage several times throughout the morning, was greeted like a hero, quickly drawing a crowd as he walked along a corridor to greet vendors.

Flynn urged the crowd to become active in local issues, noting that 200 school boards have been overturned in recent months.

“Local action has national impact,” he said. “I like to call it ‘tactical civics.’ It’s how we’re going to take this country back. They work for us. You have to get involved like you’ve never been involved before. … The nation is in crisis.”

Flynn interviewed 8-year-old Fiona, who was suspended from school for refusing to wear a mask.

“You should do what you think is right, and nothing is impossible,” the little girl said to cheers.

Dr. Vladimir Zelenko, who claims he has developed a COVID-19 protocol that is 99% effective for COVID-19 patients, said the country is being buffeted by an ideology that embraces evolution rather than God, and that some have even embraced the notion of human superiority once espoused by the Nazis.

“If anyone thinks that ideology is gone, they’re mistaken,” he said. “But it’s not anti-Semitic. It’s something being embraced by the sociopathic pagans of yesteryears. They believe themselves to be God.”

Such, people, he said, are the enemies of God.

“The beauty of what God has given us is the gift of consciousness and choice,” Zelenko said. “If we choose properly, we can have a relationship with the creator.”

Zelenko was followed by Dr. Stella Immanuel, who received a rock star’s welcome. Resplendent in African attire, Immanuel made national news in 2020 amid her charge that some illnesses were the result of demonic possession, and claims that she cured 3,500 COVID-19 patients using hydroxychloroquine, a sulfate used to treat malaria.

Immanuel and her treatment claim was cited by then-President Trump.

“To the unsung heroes who died needlessly while we debated science, may the Lord comfort their loved ones,” Immanuel said to applause. “This is a place where the truth can be heard. For the sick who died in this battle, we have to engage.”

Immanuel told the gathering she is writing a new book exposing the fallacies behind the 2020 pandemic, and announced the formation of Freedom Med, a new healthshare plan.

“We’re going to shake the medical establishment!” she said to cheers.

Immanuel is a member of America’s Frontline Doctors, a nationwide civil liberties organization.

Franceska Abramczyk, social media director, said the goal of America’s Frontline Doctors is to educate and empower medical professionals as well as “the boots on the ground,” ordinary people through a citizens’ corps.

Asked if they oppose medical mandates, Abramczyk said, “We support the freedom of the patient’s choice and the doctor-patient relationship to make that choice.”

What attendees were saying

Jennifer Patrick of Cleveland said she chose to get a vaccine at the behest of her uncle. She said she’s attending both days of ReAwaken America with her sister and her niece.

“We came because we believe this has the truth,” Patrick said. “The mainstream media skews stories. There’s been a lot of misinformation. A lot of people have closed their minds as a result of it. In here, we’re free-thinkers.”

Patrick added that while she believes COVID is real, “I think they hyped it it up. There’s been a lot of misinformation.”

Dressed like a gentleman cowboy, Everett Triplett said he traveled from Nevada to attend the event. It’s his fourth one. Everett’s table featured handwritten and highlighted notes on enlarged copies of prophetic Scripture.

“I’m telling people what God said,” Triplett said. “COVID is a weaponized virus to cause as much death and destruction as it can.”

Some of the most excitement was triggered by the appearance of Stone, the flamboyant political consultant who worked for four presidents.

Stone was pardoned by Trump after he was convicted on charges of lying to Congress, witness tampering and obstruction related to the 2016 presidential campaign.

He cited a recent report that some conservatives argue prove the Democratic Party spied on Trump when he was a candidate and president.

“This makes Watergate look like small potatoes,” he said. “They called us conspiracy theorists, but no, we’re conspiracy realists. They called me a ‘dirty trickster,’ but claims of Russian collusion was the greatest dirty trick of all time.”

Stone told the crowd he has became a Christian.

“It’s only through the grace of God’s people praying for and supporting my wife and I that I’m able to stand here with you,” he said.

He elicited gasps when he stated that the White House is under a cloud that appeared after Joe Biden was elected.

“It’s a demonic portal,” he said. “Only prayer will make that portal close.”

Stone lauded Flynn, saying that men like him are the nation’s only hope.

“I’m tired of hearing Gen. Flynn described as anything but an American hero,” he said to cheers.