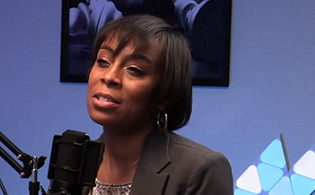 Last year when Ohio’s 11th district congresswoman Marcia Fudge was confirmed to be President Biden’s Secretary of Housing and Urban Development, it set up a special election for the seat that was a prize plum for aspiring Democrats (the seat is safely blue). Thirteen candidates stepped up to run in that August election.

The winner was Shontel Brown, who was then serving on county council and as chair of the Cuyahoga County Democratic Party, who easily won the general election with almost 80% of the vote. She was sworn in in early November, and hit the ground running, casting a vote with days for the job-creating infrastructure act.

In a mere five months, she’s written and introduced a half dozen pieces of legislation and co-sponsored four dozen more. She’s been busy forging relationships in D.C. while remaining highly visible in the district and is considered one of Congress’s rising stars. She’s amassed a voting record so progressive, she ranks above all members of the highly publicized “Squad,” understanding that fighting for progressive causes takes place in the trenches and not on TV.

As do all congresspersons, she’s running again to retain her seat November, and she has a challenger in the May 3 Democratic primary. If you want to learn more about her and why it’s essential to keep her in the job, she’ll speak at the City Club on Friday April 15. The forum starts at noon, and you can watch on livestream as well as attend the event. If you have questions, tweet them to at @TheCityClub or text 330-541-5794.