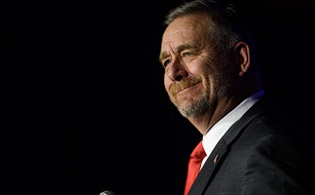 Ohio’s Republican attorney general has asked a federal court to lift a legal hold on the state’s six-week abortion ban — passed and signed in 2019 — to put that so-called “heartbeat” law into effect immediately.

Attorney General Dave Yost said in the two-page filing that the hold on the law was based on cases establishing a constitutional right to abortion, which the Dobbs ruling overturned.

Ohio was one of the first states to consider a six-week abortion ban when it was proposed in 2011. It was introduced every two years after that.

The ban did pass in 2018, but outgoing Gov. John Kasich, a Republican, vetoed the bill. The decision to veto that legislation came just a few weeks before leaving office, even though he had signed all previous measures restricting abortion passed during his administration.

The ‘heartbeat’ bill passed again in 2019 and was signed into law by Gov. Mike DeWine, a Republican, who had said during his 2018 campaign that he would approve it. The ACLU of Ohio immediately sued and the law was put on hold.

Yost also put out a statement about the possibility of violent protests, which so far hasn’t happened.

After the Dobbs decision, Yost noted that the abortion debate will continue, but “passion is no license to violence.”

“I call again on my federal colleague, Attorney General Merrick Garland, and my fellow state attorneys general to publicly commit to holding violent protesters accountable under the law, no matter which side they are on,” Yost said in the video.

Earlier this week Yost and 18 other Republican attorneys general wrote a letter to Garland, asking him to “take swift action in response to recent terrorist acts against anti-abortion organizations.” They cited media reports as well as statements from religious groups.

On January 6 Yost did call for criminal prosecution of those who stormed the U.S. Capitol as well as those involved in Black Lives Matter protests at a federal courthouse in Portland, Oregon in 2020.

Republican lawmakers, who hold a supermajority in the House and Senate, have said they plan to work on a bill that bans abortions in Ohio now that Roe v. Wade has been overturned. The legislature is on break but will likely take up the issue at some point this year.