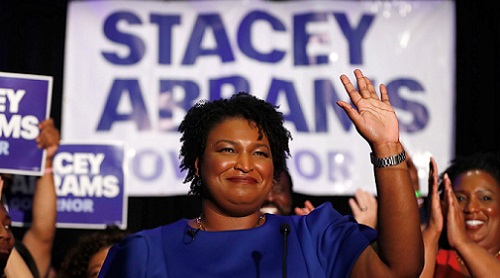 The Abrams campaign picks up more fundraising steam, widening the margin between herself and Republican Kemp!

On this week’s episode of Black women getting to the bag, Stacey Abrams has left Republican Brian Kemp in her fundraising dust as she closes in on $50 million dollars raised since announcing her campaign for governor last December. That’s right, in just seven months, Abrams has amassed enough to place a wide gap between herself and her biggest competition, with nearly $22 million being raised in the last two months alone.

According to the Washington Post, Abrams announced on Friday that her direct campaign, and its associated One Georgia committee raised $21.8 million between the beginning of May and June 30th, and in total, had $18.5 million dollars of cash on hand.

Kemp on the other hand has recently announced that his cash on hand amounts to a mere $6.4 million.

While state ethics officials ruled that Abrams could not use the the leadership committee vehicle One Georgia until she had been officially named as the Democratic nominee after the primary, state party officials argued that she (and won) on the basis that she was already the party standard-bearer as she was the only Democrat to run.

“While we are gratified by the strong fundraising we have secured to date, we understand that our campaign must continue to dramatically outraise and outspend the incumbent in order to create a level playing field,” Abrams’ campaign manager, Lauren Wargo wrote in a public memo on Friday.

Wargo also shared that the money would be spent “on deep, continuous and thoughtful engagement with the most diverse electorate in the state’s history,” continuing to focus on Abrams’ voter mobilization efforts.

A spokesperson for Kemp, Tate Mitchell said that Kemp will run on his record while acknowledging that “Abrams and her liberal allies can — and will — continue to outraise and outspend our campaign.”

“Far-left radicals from across the country are bankrolling Stacey Abrams’ campaign to bring the failed agenda of D.C. Democrats to Georgia,” Mitchell said in a statement.

And while Abrams’ campaign is spending rapidly, (as is the Kemp campaign) gone are the days where Democratic candidates had to beg and plead for resources. The money continues to roll in in support of Abrams.

You know what they say though, “scared money don’t make none,” and Abrams continues to prove that she will not be backing down.