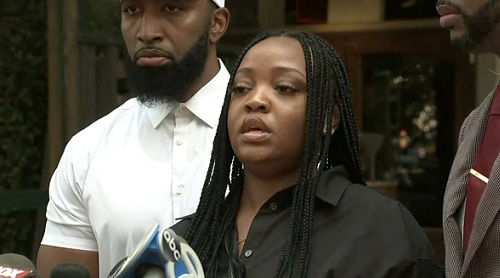 FEATURED PHOTO: JODI BROWN MOTHER OF ONE OF THE SNUBBED CHILDREN

The attorney for the family says they are looking into the incident and have not ruled out the possibility of a law suit!

Two young Black girls got the cold shoulder when they tried to shake hands with a character on a trip to Sesame Place. The video went viral and got lots of viewers angry about what looked like a clear case of racism. Now the girls’ family is lawyering up, saying they are not ruling out a lawsuit against the Philadelphia-area theme park.

On a weekend visit to the Sesame Street-themed amusement park, two young Black girls attempted to reach out to a performer dressed as Rosita, Sesame Street’s first bilingual character, during a parade. After high-fiving white children nearby, Rosita looked at the Black girls and shook her head “no,” leaving them disappointed. The girls’ mother posted a video of the interaction on Instagram, and the video has since received over 550,000 views.

The video sparked outrage from viewers, including Kelly Rowland and activist Tamika Mallory, who were quick to call out the theme park for the way the young girls were treated. For their part, Sesame Place issued a formal apology, claiming that the performer in the Rosita costume did not intentionally mean to shun the girls during the parade.

B’Ivory LaMarr, the family’s attorney, told TMZ that they are conducting an investigation which includes speaking with other people who witnessed the incident. They are also looking into other videos that have emerged showing the Rosita character brushing off other kids of color at the park. “While we hate to rush to judgment to consider ‘race’ as the motivating factor to explain the performer’s actions, such actions both before and after the young girl’s request only lead to one conclusion,” LaMarr said.

A rep for Sesame Place Philadelphia also issued a statement to TMZ, expressing regret for what the family went through during their visit to the park, adding, “We will conduct training for our employees so they better understand, recognize and deliver an inclusive, equitable and entertaining experience to our guests.”