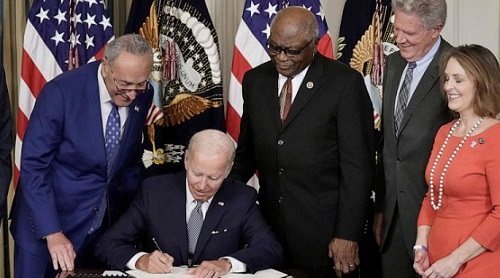 The bill represents the most significant climate investment in U.S. history.

Additionally, the law will reduce the national deficit.

Biden said new taxes would pay for the bill, including a 15% minimum tax on large corporations and a 1% tax on stock buyback.

Overall, it’s projected that the measure would result in the government raking in more than $700 billion over ten years while spending about $430 billion to help reduce carbon emissions and securing the extension of subsidies in the health care law.

“We have crossed a major threshold, and it’s going to have significant impacts on international climate action,” said Gore, long a crusader of environmental justice and a Nobel Prize winner for climate activism.

According to a study published by the Federal Reserve Bank of Minneapolis, Black households are more exposed to inflation fluctuations than their white peers.

Researchers concluded that if prices paid by white households increase by 7 percent over a year, calculations suggest that one may expect them to increase by 7.5 percent for Black families.

“In our research, we examine how this informs the trade-off between inflation and unemployment stabilization for White and Black households,” the study authors explained.

“The result implies that when evaluating trade-offs between inflation and unemployment, one ought to keep in mind that the costs of inflation may be borne disproportionately by the more disadvantaged group.”

With gas, food, and other prices rising, the authors concluded that necessities such as groceries, electricity, and wireless phone service make up a larger share of Black families’ budgets.

The study said that Black households also spend a more significant portion of their income on goods and services with prices that change more often.

The result, according to researchers, isn’t a mystery: “Black families will suffer the worst effects of rising inflation because they lag behind their White counterparts in income, wealth, financial savings and home ownership.”

“President Biden continues to keep his promise to our families and communities across the nation,” Chavis stated.

“We also note that Black owned businesses including the Black Press of America will also have increased opportunities to expand economic development, innovation, advertising, and new workforce advances as a direct result of the Inflation Reduction Act.”

“Black families, especially those without an employed college graduate, are affected the most by inflation compared with all the other demographics,” said Ellie Walters, the CEO of Findpeoplefaster.com.

“Necessities like groceries, accommodation, gas, electricity bills and phone bills eat up most of their income, leaving them with fewer savings since most of them fall within the low-income groups,” Walters stated.

She said Black families are affected by even the slightest increase in price, and with the rising recession, many might have to live without most of these necessities.

“A large number of Black families live paycheck to paycheck and cannot easily escape the constantly increasing wealth gap between them and the other demographics, especially the white,” Walters remarked.

“Inflation often makes this dilemma worse, since during inflation, wages are cut, and workers are laid off. These low-income earners, largely made up of Black community members, are trapped by an economic cycle that seems rigged against them.”

Ronda Brunson, an expert in financial planning and credit restoration at Project Restore Bmore, agreed that Black households would continue to feel the impact of rising inflation.

“Most Black homes with car notes are paying double-digit interest rates, same for credit cards. Yet, we are not conditioned to go for better but to be grateful for whatever approval without contesting,” Brunson asserted.

“If I am already paying three times more than you for the same vehicle, then of course, when inflation occurs, I’m going to feel it first.”

According to the Brookings Institute, the median wealth of a white household is $188,200, which is 7.8 times more than the average Black household at $24,100.

Two years ago, the homeownership rate for white Americans was about 73% compared to 42% for Black Americans.