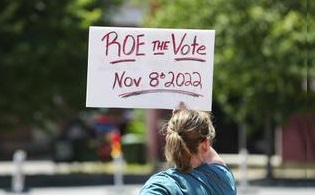 There’s been a flood of people registering to vote since the U.S. Supreme Court’s decision in Dobbs v. Jackson Women’s Health in June striking down the constitutional right to abortion. Even though this midterm year with a Democratic president was predicted to be good for Republicans, the data in Ohio and some other states is suggesting something else.

He estimates Ohio women are leading men in registering to vote by double digits.

“Prior to June 24, when you look at the new registrants in Ohio, they’re roughly even between women and men, which is generally what you would expect to see,” Bonier said in an interview for “The State of Ohio”. “After Dobbs, women have an 11-point gender gap advantage over men among new registrants.”

That’s been the case in other states too, Bonier said, as women voters signed up in big numbers after the ruling. In early August, Kansas voters resoundingly rejected a ballot issue to restrict abortion rights 59%-41%.

Ohio’s voter registration form does require a birthdate, so age can be determined. And Bonier said there are lots of new younger voters since this summer.

“58% of those voters who have registered to vote in Ohio since the June 24 Dobbs decision are under the age of 35, which is a pretty, pretty significant increase from just before that period,” Bonier said.

A recent poll shows younger voters are more motivated this year, but in 2020 less than half of voters under 29 cast ballots. But Democrats have the edge with women, who are more likely to vote than men.

Voter registration for the Nov. 8 election in Ohio ends on Oct. 11. Early voting begins the next day.