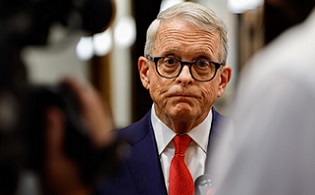 It’s no wonder Gov. Mike DeWine has refused to debate his opponent, Mayor Nan Whaley (“Vance, DeWine to skip commission’s debates,” Sept. 22). He hopes the public won’t be reminded of the redistricting fiasco he oversaw while on the Ohio Redistricting Commission. Over 70% of Ohioans voted for fair, competitive districts that allow communities to elect legislators that represent them, instead of letting elected officials handpick their constituents. Yet the commission’s Republican majority used every trick in the book to thwart the redistricting process (slow walking, intentional delays and missed deadlines, ignoring and dismissing input from both citizens and professional mapmakers) so they could retain their gerrymandered maps.

The constitutionally compliant maps submitted by 30 citizens outperformed the one adopted by the ORC, yet they were rejected in favor of a rigged map that doesn’t put voters first. DeWine, a former prosecutor, should know better than to sign off on a plan that was ruled unconstitutional by the Ohio Supreme Court, thus egregiously flouting the rule of law underpinning our democracy.