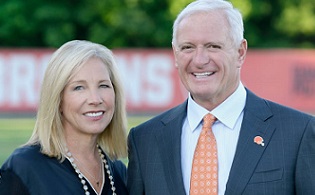 A couple of years ago, Cleveland was found to be America’s poorest big city, with nearly half its children and a third of its citizens living in poverty. It was also recently ranked one of the worst places in the U.S. for Black women, blocking their opportunity and worsening their health. (Mayor Justin Bibb has formed a Commission on Black Women and Girls to explore solutions.)

Meanwhile, a loud minority in northeast Ohio is devoted to its football team, and over the years, we’ve showered tax dollars on its billionaire owners, Jimmy and Dee Haslam, as politicians have overrated the value of a football team to a city where infant and maternal mortality are higher than in some third-world countries.

But recently the Haslams have outdone themselves in arrogance, entitlement and contempt — especially a dangerous, toxic contempt for women, who carry a lot of the tax burden on their tired, overworked backs and who aren’t the primary consumers of professional football.

Much has been written and said about their acquisition of quarterback Deshaun Watson, whom they awarded the highest guaranteed contract in football history, made possible in part because the taxpayers handed them a free stadium and all its various revenue streams. Accused by dozens of women of sexual imposition, Watson made a pretend apology he immediately walked back on; the Haslams had his back and are clearly hoping their hiring of a sexual predator will blow over.

But they continued to display their disdain for women in another way. When Roe v. Wade was overturned in June, fans of the Columbus Crew, also co-owned by the Haslams, pressed the team to take a stand in support of women’s reproductive freedom. It rejected these demands, saying it wanted to “stay out of politics and focus on being inclusive.”

They’ve done a complete about face and revealed themselves to be liars. They are among the hosts of a high-dollar fundraiser for Republican U.S. Senate J.D. Vance, who has shown his scorn for women over and over in a stream of degrading comments about how women should live their lives.

One sports reporter, defending the Haslams, said “The Haslams can do whatever they want with their money — whether another person agrees with their POV or not.” But the problem is they don’t run these teams with “their money” — they’re heavily funded with OUR money.

It’s no secret that I think directing tax dollars to wealthy team owners is a misuse of public money; it’s been shown over and over that the whole “economic benefits” argument is a sham — that football in particular, with its limited number of games, takes more that it gives and that “civic pride” is vaporous. Sports teams, even victorious ones, can’t paper over poverty, violence, poor health outcomes, unsafe housing, lack of job opportunities and underfunded schools.

All of that could be addressed with some of the money lavished on these billionaires who are turning around and supporting a candidate who has suggested that women have an obligation to stay in violent marriages, compared abortion to slavery, when depriving women of control of their own bodies is more similar to slavery, and referred to rape & incest as “inconvenient circumstances” where a fetus takes precedence over the woman “even though the circumstances of that child’s birth are somehow inconvenient or a problem to the society.”

That’s easy for a wealthy, elite Ivy League venture capitalist who moved back to Ohio from San Francisco when he decided to run for a prestigious office to say. He doesn’t know what “inconvenient” means to an inner-city Cleveland Black woman lacking adequate health care and there’s no indication he cares. That this woman is paying for Haslams’ toy (the Browns) while they back a candidate openly dismissive of her needs and her life is shameful.