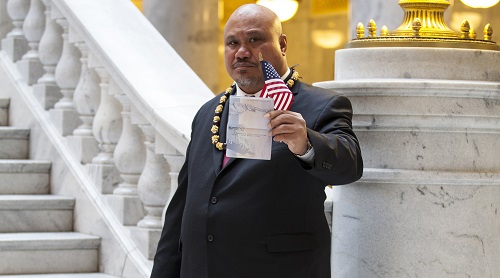 The Supreme Courtdeclined to take a case challenging its 100-year-old racist precedents that continue to deny equal rights to the 3.6 million residents of overseas U.S. territories.

Three American Samoans living in Utah and a Samoan nonprofit petitioned the court in Fitisemanu v. U.S. to overturn the Insular Cases, the court’s early 20th-century precedents that enabled the country’s colonial expansion by allowing it to absorb overseas territories populated by non-white peoples while denying them equal rights or a path to statehood.

“It’s a punch in the gut for the Justices to leave in place a ruling that says I am not equal to other Americans simply because I was born in a U.S. territory,” John Fitisemanu, the lead plaintiff in the case, said in a statement. “I was born on U.S. soil, have a U.S. passport, and pay my taxes like everyone else. But because of a discriminatory federal law, I am not recognized as a U.S. citizen.”

The Insular Cases that deny people like Fitisemanu equal rights as citizens were explicitly founded on racist premises. The cases, which occurred from 1901 to 1922, claimed that the people of the overseas territories the U.S. conquered in the Spanish-American War came from “savage tribes” and “alien” and “uncivilized race[s]” who were “absolutely unfit to receive” the rights provided by the Constitution. The court invented a new legal class of “unincorporated territory” for the colonial possessions taken from Spain that denied them equal rights and statehood.

Today, the Insular Cases still govern the U.S. overseas territories of American Samoa, Guam, Northern Marianas Islands, Puerto Rico and the U.S. Virgin Islands. In each territory, Congress has negotiated different rules for people’s access to their rights as Americans.

For example, unlike other territorial inhabitants, American Samoans are not officially U.S. citizens, but American nationals. This means that even if they move to a state or the District of Columbia, they will be denied the right to vote. This was one of the chief complaints made by Fitisemanu and the other plaintiffs in the case.

Fitisemanu v. U.S. challenged the constitutionality of the Insular Cases by arguing that the 14th Amendment’s citizenship clause grants U.S. citizenship to all people “born or naturalized in the United States, and subject to the jurisdiction thereof.” As these territories are both a part of the U.S. and subject to its jurisdiction, the residents of the territories ought to be granted full access to that citizenship, the plaintiffs argued.

For years now, territorial residents have sought to loosen the grip of the Insular Cases or overturn them entirely through the courts. In each case, the courts have refused to do so.

There was some expectation that the Supreme Court may act differently on Fitisemanu after Justices Neil Gorsuch and Sonia Sotomayor declared in the case of Vaello-Madero v. U.S. that they would like to see the Insular Cases overturned.

“[It is] past time to acknowledge the gravity of this error and admit what we know to be true: The Insular Cases have no foundation in the Constitution and rest instead on racial stereotypes. They deserve no place in our law,” Gorsuch wrote in a concurrence in Vaello-Madero.

In agreeing with Gorsuch that the Insular Cases should be overturned, Sotomayor called them “both odious and wrong” in her Vaello-Madero dissent.

But four of the nine Supreme Court justices must vote to take up a case. Clearly, there were not four votes to take up Fitisemanu. There were also no written dissents from the denial of the case.

This article originally appeared on HuffPost and has been updated.