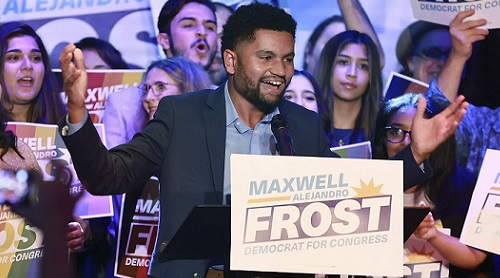 Throughout his congressional run, the 25-year-old Democrat has focused his campaign on the issue of gun violence and crime on Florida’s streets.

Tuesday night, Florida Democrat Maxwell Alejandro Frost made history after he became the first member of Generation Z to be elected to Congress.

According to the Associated Press, 25-year-old Frost won his race for Florida’s District 10 with a sweeping vote, pulling in 59% of the vote from his Republican opponent Calvin Wimpish, who only gained 40% of votes from Floridians. Frost will now succeed outgoing Democratic Rep. Val Demings.

After earning his historic win on Tuesday, Frost took to Twitter to thank his supporters, writing:

“We made history for Floridians, for Gen Z, and for everyone who believes we deserve a better future. I am beyond thankful for the opportunity to represent my home in the United States Congress.”

Who is Maxwell Frost?

According to his campaign website, Frost is of Afro-Cuban descent. His mother and grandma migrated from Cuba to Florida during the Freedom Flights in the early 1960s with little to no money. To survive, his grandmother, Yeya, worked “more than 70 hours a week” in factories, where she was exposed to harsh working conditions. Unfortunately, the cycle of poverty trickled down to his mother. As a result, she was forced to put him up for adoption.

Throughout his campaign, Frost has used his difficult upbringing as a catalyst for change, hoping to build a brighter and better way of life for marginalized communities “left behind” in society.

The young Democrat burst onto the political scene as an organizer shortly after the mass shooting in Newtown, CT occurred in 2012. Frost served as the national organizing director for March for Our Lives, a group that advocates for gun control policy and reform. Before entering the competitive world of politics, Frost made ends meet as a Uber driver, PEOPLE reported.

Before launching his political campaign, the star activist led the ACLU of Florida’s fight to win Amendment 4, which restored voting rights to over 1.6 million Floridians who had previous felony convictions. He also helped to secure an unprecedented five billion dollars in funding for community-based violence prevention programs in President Biden’s budget proposal.

What will he work to change in Congress?

Throughout his congressional run, Frost has focused his campaign on the issue of gun violence and crime on Florida’s streets. After the devastating mass shooting in Uvalde, Texas, the young activist challenged Florida Republican Ron DeSantis at an event over the governor’s second amendment views.

For Frost, the issue of gun violence hits close to home. Florida Politics noted that the young activist survived a chaotic shooting incident in downtown Orlando.

“As a gun violence survivor myself and the former March for Our Lives Organizing Director, it is a great honor to have so many incredible gun violence prevention organizations and advocates behind me in this campaign,” Frost said during his campaign trail. “In Congress, I will work day and night to help create a world where people no longer have to fear gun violence, where students no longer have to hide under their desks for active shooter drills, and where we can put an end to the everyday gun violence that plagues communities of color.”

Now, that he has won a seat in Congress, Frost said he will work to reform harmful gun policies that have long plagued the safety of the American people. The young Democrat promised to ban assault weapons and high-capacity ammunition magazines. He also plans on funding and supporting local community violence intervention programs that will ensure congress allocates at least $37 million to fully fund public research on gun violence.

Community Justice Action Fund, United Against Gun Violence, and the Newtown Action Alliance are just some of the gun control advocacy groups that have rallied in support of the star throughout his campaign run.

In addition to gun control, the steadfast progressive also plans to fight for Medicare expansion and environmental justice.

Frost wants supporters to look past his age

While some have questioned the young politician’s age, Frost told PEOPLE back in September, that he didn’t view his age as an obstacle, but rather an advantage.

“What we’re finding more and more, our generation is gonna have the most jobs in a lifetime than other times in history,” Frost said at the time. “[Members of Gen Z] move around jobs a lot, we will own the least amount of assets and property, we carry the most personal debt.”

The Florida native added: “I don’t think young people [on either political side] are interested in different issues — we all want resources, opportunities … we want our friends and people we’ve never met before to enjoy their lives,” he told PEOPLE. “We think about things like, ‘How do we protect each other? How do we build a government that protects the most vulnerable?’”