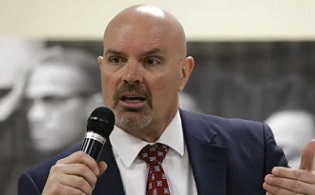 Dr. Rachel Lovell, Assistant Professor of Criminology and Director of the Criminology Research Center in CSU’s College of Education and Public Affairs (CEPA), was featured in an October 23 Cleveland Plain Dealer/Cleveland.com article, “How to catch a rapist? Study finds Cleveland, Cuyahoga authorities failed to collect DNA from nearly 15,000 suspects over 7 years”. The article captures the groundbreaking work of Dr. Lovell and CEPA’s Criminology Research Center’s study published last month in the Journal of Forensic Sciences. It also highlights the partnership between CEPA’s Criminology Research Center and the Cuyahoga County Prosecutor’s Office,which leans on Dr. Lovell’s team to oversee its research support, and has since become a national leader in identifying and prosecuting cold-case rape offenders.

The study, “Detailing the process of identifying and the outcomes of efforts to address lawfully “owed” DNA, was awarded grants from the Justice Department to reinvestigate old crimes and identify 14,931 suspects who avoided DNA collection. Known as lawfully “owned” DNA, these samples should have been collected and entered into the FBI’s Combined DNA Index System (CODIS) as part of required protocol but were not. Dr. Lovell and her team at the Criminology Research Center, in collaboration with prosecutors, located 3,069 of those individuals, who either remained in the justice system or had reentered it for other purposes. Prosecutors arranged for them to submit DNA samples by referring them to swabbing authorities. That work resulted in 116 hits to crimes and crime scenes in CODIS. Most of the hits were cold cases and resulted in 27 indictments and 13 additional pending investigations. Nearly all the crimes occurred in Cuyahoga County, with rapes and sex crimes being the most common.

Launched in 2016 in partnership with the Cuyahoga County Prosecutor’s Office to analyze arrest and conviction data captured from 2010 through 2016, the study marks the first major effort to identify people outside the prison system who “lawfully owed” their DNA. The study answered four key questions: What was the scope of the problem in this jurisdiction? What was the process by which individuals who owe were identified? What were the outcomes of these efforts? And what were the lessons learned and recommendations for other jurisdictions? The study serves as an important blueprint for other jurisdictions and underscores the importance of having effective policies and practices to help ensure that all who should lawfully have their DNA collected and uploaded into CODIS do so.