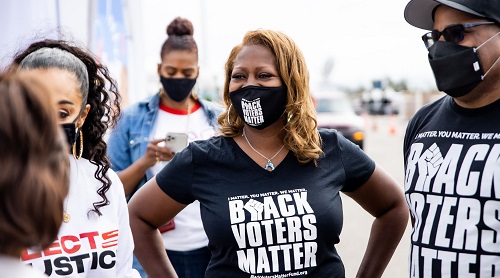 There was a lot of good news — or at least news that felt good — for Democrats this election cycle, from holding the Senate to remaining stubbornly competitive in the House.

But as more data becomes final, it’s clear that Black turnout is not one of those feel-good stories for the party.

We won’t get conclusive numbers on this for months, but the evidence so far raises the distinct possibility that the Black share of the electorate sank to its lowest level since 2006. It certainly did in states like Georgia and North Carolina, where authoritative data is already available.

The relatively low turnout numbers aren’t necessarily a surprise. After all, this was not supposed to be a good year for Democrats. Perhaps this is one of the things that went about as expected, with no reason to think it portends catastrophe for Democrats in the years ahead.

Still, relatively low Black turnout is becoming an unmistakable trend in the post-Obama era, raising important — if yet unanswered — questions about how Democrats can revitalize the enthusiasm of their strongest group of supporters.

Is it simply a return to the pre-Obama norm? Is it yet another symptom of eroding Democratic strength among working-class voters of all races and ethnicities? Or is it a byproduct of something more specific to Black voters, like the rise of a more progressive, activist — and pessimistic — Black left that doubts whether the Democratic Party can combat white supremacy?

Whatever the answer, it is clear that the relatively low Black turnout was not exactly disastrous electorally for Democrats in 2022. With the possible exception of the Wisconsin Senate race, it’s hard to identify a high-profile election where Democrats might have prevailed if the Black share of the electorate had stayed at 2014 or 2018 levels.

But it does help make sense of one of the stranger features of this election: how Republicans fared so well in the national vote, but routinely underperformed in critical states and districts. With the important exceptions of Georgia and North Carolina, the Black population share was below the national average in virtually all of the key districts and Senate contests.

Georgia and North Carolina are two of the states where voters indicate their race when they register to vote, offering an unusually authoritative look at the racial composition of the electorate. In both states — along with Louisiana — the Black share of the electorate fell to its lowest levels since 2006.

In all three states, the turnout rate among Black voters was far lower than among white voters. In North Carolina, for example, 43% of Black registered voters turned out, compared with 59% of white registered voters — roughly doubling the difference from 2018 and tripling the racial turnout gap from 2014.

While similarly conclusive data is not available elsewhere so far, the turnout by county suggests that a relatively weak Black turnout was a national phenomenon.

In Philadelphia, Milwaukee and Detroit, turnout fell 10% to 12% beneath 2018 levels. At the same time, turnout increased in the rest of Pennsylvania, Wisconsin and Michigan. Obviously, there are plenty of voters of other races and ethnicities in Philadelphia, Milwaukee and Detroit, but the relatively lower Black turnout in these places is part of a broader nationwide pattern: In areas where Black voters represent a larger share of the population, the turnout sank by more.

The decline looms especially large in Wisconsin, where the Democrat Mandela Barnes fell 26,718 votes short of victory (1 percentage point short), even as the Democratic margin in the City of Milwaukee fell by a nearly identical 27,612 votes compared with 2018.

Barnes, who was born in Milwaukee and represented part of the city in the state Assembly, did well enough outside Milwaukee to have had a very good chance to win the state. But the city did not represent the share of the state’s electorate that it did two or four years ago.

The lower Black share of the electorate was not quite decisive in North Carolina, where the Democrat Cheri Beasley probably needed Black turnout to match or exceed white turnout share to win her Senate race (she lost by three points). It probably wasn’t decisive in the Georgia governor’s race either; Stacey Abrams lost by almost eight points. No realistic Black turnout would have been enough.

Perhaps more remarkable is that Raphael Warnock, the Democratic senator from Georgia, and Beasley fared so well, even with Black voters representing such a low share of the electorate. Warnock and Beasley appear to have fared better among non-Black voters than any Democrats in recent memory in either state.

For Warnock, the relatively low Black turnout in the general election may offer some upside in the runoff Dec. 6 against Herschel Walker.

In the 2021 runoff, the Black share of the electorate rose by enough for Warnock and Jon Ossoff to prevail, even though Republicans won the most votes in the general election two months before.

A similar increase this time, though certainly not guaranteed, might give Warnock a fairly comfortable victory.

Indeed, there are a few positive signs for Democrats already. So far, Black voters represent 38% of the early vote. It’s tough to read too much into this, given the shortened early voting window (and the fact that many blue-leaning counties allowed early voting over the weekend). We’ll see whether it holds up Election Day.