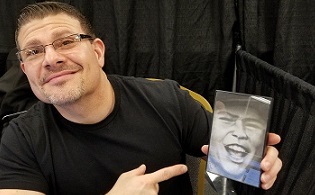 Yano Anaya, a cast member of “A Christmas Story,” was kicked off the iconic home’s property by its owner, TMZ reports.

A video published by the outlet showed Anaya, who played Grover Dill in the 1983 film, taking photos with fans outside the Cleveland home on Nov. 15. The house and surrounding property was put up for sale for an undisclosed price earlier this month.

In the video, homeowner Brian Jones approached Anaya and yelled at him to leave the property. Jones called the actor a “scammer” and “loser,” and told him, “Don’t ever come here again.”

Anaya was confused by the incident, his business partner Emmanuel Soba told TMZ.

A group of “A Christmas Story” cast members, including the actor, were interested in buying the house. However, the home’s listing agent Chad Whitmer said Jones has no plans to sell the property to the group. Jones told TMZ he was upset by Anaya’s visit because the group launch a GoFundMe campaign to purchase the home.

“I apologize for the way I expressed myself; however, it was out of concern that fans could be misled into contributing to a GoFundMe campaign that will not result in the purchase of the house,” he said.

“I have no association with any GoFundMe campaign. I am not selling the house through GoFundMe, so fans should not contribute to that fund under false pretenses, thinking their money is going toward buying the house,” he added. “I am entertaining offers only from qualified buyers through my real estate broker.”

Soba told TMZ that a member of the group did create a GoFundMe campaign, but that it was never activated. He also said the group already has investors who could have bought the home without donations.

There is one active GoFundMe campaign to buy the house, but it does not appear to be related to the group.