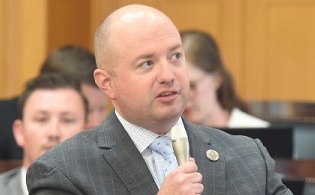 A House committee amended a resolution last Thursday to require all proposed ballot issues to receive 60% of the vote in order to amend the state constitution.

Rep. Brian Stewart (R-Ashville) said he requested the committee to adopt an amendment to his resolution to include legislative ballot initiatives to also require 60% of the vote on election day in order to be enacted.

“I think if we’re gonna go to the ballot it’s just frankly a simpler argument to say 60% across the board and so that was actually a change I requested and I appreciate the chairman for getting it added promptly today,” said Stewart.

The original proposal only changed the threshold for citizen initiatives. Stewart said he started with just citizen-led initiatives because legislative-led initiatives must receive a three-fifth majority in the House and Senate in order to be place on the ballot.

Opponents say this resolution is politically motivated to block future citizen-led ballot issues, such as a measure to protect abortion rights or legalize recreational marijuana.

Katy Shanahan is adviser for Equal Districts Coalition, a group of organizations that are against gerrymandering and fights for direct democracy. She said the resolution would raise the bar on citizens who would want to bypass the legislature in order to create policy.

“What’s clear here is that this is an effort to block the people of Ohio’s ability to amend our constitution and to ensure that we can enshrine rights and protections for the people that obviously Ohio Republicans don’t want us to have,” said Shanahan.

A collection of more than 140 organizations have joined forces to call on the legislature not to pass the resolution. Those groups include faith, labor, liberal, and conservative organizations.

Secretary of State Frank LaRose, a Republican, is a vocal supporter of the resolution. He said the threshold for constitutional amendments must be raised in order to stave off special interest groups. LaRose said there have been companies that pay millions of dollars to carve out a monopoly in Ohio’s constitution, using the casino ballot issue as an example.

The resolution would have to pass the House and Senate with a three-fifths majority by the end of the year in order to put it on the May 2023 ballot.