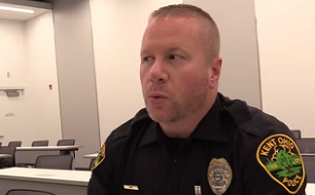 Voters in Kent passed an ordinance in November that gets rid of penalties for minor marijuana possession. Kent is one of dozens of cities across the state that have made this move in recent years. But not all law enforcement officials are following these new ordinances.

The Sensible Marijuana Ordinance passed overwhelmingly in Kent with more than 80% of voters supporting it. Mike Fricke was the campaign manager for the movement in support of the ordinance.

Kent’s marijuana ordinance states that people found in possession of less than 200 grams will be fined zero dollars and will not have to pay court costs. More than 200 grams is a felony. Kent’s ordinance is similar to ordinances passed around the state, in cities like Cleveland, Toledo and Columbus that also have removed penalties for minor marijuana possession.

“It doesn’t change the law,” Fricke said. “We cannot do that with a voter initiative like this, but we can change the penalties.”

But the police in Kent disagree.

“It is still illegal to possess marijuana in the city of Kent and the state of Ohio,” Administrative Lieutenant Michael Lewis said.

Kent police officers have been directed to charge people under state law, where 200 grams of weed can land you with 30 days in jail and/or a $250 fine, instead of Kent’s new ordinance, Lewis said.

“So, there won’t be much of a change in how we approach things from the police standpoint,” Lewis said.

This leaves marijuana possession in Kent back where it was before the ordinance was passed and organizers like Fricke very frustrated.

“A lot of the leaders and public servants that we have running our jurisdictions believe that it is not something that the people want even though you know pretty convincingly it is something we want,” Fricke said, “and they believe it’s their responsibility to you know fight it every way they can.”

The police department has the option of charging people under the Kent ordinance or the Ohio Revised Code, Lt. Lewis said. In a statement, Police Chief Nicholas Shearer said the police are sworn to uphold the laws in both Kent and Ohio.

But that’s not how Aqueelah Jordan views this. She’s the chief assistant prosecutor for the city of Cleveland. Cleveland City Council passed a similar marijuana ordinance to Kent’s in 2020.

“For the most part officers are not issuing citations for marijuana alone,” Jordan said.

That’s led to the number of minor marijuana possession cases in Cleveland to drop significantly.

“We’ve seen far less numbers of those cases even come to our court, which is a really really good thing,” Jordan said.

The police can still write citations for minor marijuana possession, but it’s up to the prosecutor’s office to decide whether to prosecute or not, Jordan said.

In Cleveland, this means following the city’s ordinance on minor marijuana possession and deciding not to prosecute these cases. But the Portage County Prosecutor’s Office has a different take. State law trumps Kent law, Prosecuting Attorney Victor Vigluicci said, and he can’t prosecute under Kent’s ordinance instead of the state code. Jordan disagrees.

“I see it as a decision that the prosecutors are going to have to make,” Jordan said. “Are we going to do what our elected representatives are saying the community wants? Or are we going to take a different approach?”

Another issue Shearer raised with Kent’s ordinance is inconsistent enforcement of it by other law enforcement agencies.

“In our city, we have the Kent State University Police Department, the Portage County Sheriff’s Office and the Ohio State Highway Patrol who only enforce state law. In other words, if we choose to enforce city ordinance over state law, we would have four police departments in our city, and we would be the only one enforcing laws differently than the other three,” Shearer said. “It is important that the community understands what laws exist and how they will be enforced. It creates unrealistic expectations if our department is enforcing this in one manner, but under the same circumstances, three other departments are enforcing this in a different manner.”

But even if other law enforcement agencies charged under state code instead of the local ordinance, it’s still up to the prosecutor if they will prosecute or not, Jordan said.

“It still comes through the city of Cleveland’s Prosecutor’s Office,” Jordan said, “so we would still practice that same decision model of not pursuing the case.”

Vigluicci’s take on these ordinances don’t seem to be equally applied to all of Portage County. Windham passed a sensible marijuana ballot measure in 2018, and although Vigluicci said Windham’s police are charging under state law, this isn’t always the case.

Windham Police Chief Richard Garinger leaves it up to his officers if they want to charge people under state code or Windham code for minor marijuana possession.

However, deciding to charge under Windham code or state code isn’t often a problem, Garinger said.

“Quite honestly it hasn’t really been much of an issue as far as enforcement, because usually if we get somebody who has that on them they’ve usually committed some kind of other crime,” Garinger said.

Organizers for Windham’s marijuana ordinance said the police were in favor of the ordinance when they were campaigning for it.

“I do not believe that they are charging, because they were so supportive,” Samantha Farrell, director of the Sensible Movement Coalition, said.

Garinger said police chiefs do have the power to make directives like the one Shearer made in Kent.

“It could be because he’s having certain problems,” Garinger said. “I’ll be honest with you, if you know that there is marijuana out there and it’s being laced with fentanyl, then you’re probably going to want to get all that off the street.”

However, this is not a reason Shearer gave when explaining why he gave the directive to charge under state law.

The tug of war over local enforcement of minor marijuana possession offenses may not be an issue for much longer. Activists hope to have a ballot question for voters next year legalizing recreational marijuana in Ohio.