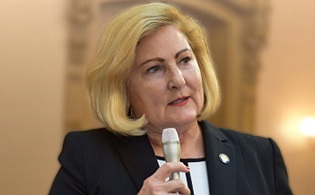 A bill advancing through the lame duck legislative session would create a Department of Education to assume many responsibilities of the Ohio Board of Education.

As 2022 has closed, there’s legislation moving through the Ohio Statehouse that many may not be aware of, Senate Bill 178, which if passed into law could minimize the authority of the State Board of Education.

Northwest Ohians voted in Democrat Teresa Fedor to the State Board of Education on November 8.

But if the Republican controlled state legislature has its way, Fedor’s powers as part of the board could be severely limited.

Senate Bill 178, which just passed the state senate, would take away much of the power the board has over decisions regarding education and put it into the hands of the governor’s office by creating a new Department of Education.

That new department would be led by a director who is appointed by the governor, not voted in directly by voters.

Republicans say an overhaul of the Ohio Department of Education is necessary to ensure Ohio’s students have the necessary workforce skills in a changing business environment, something that they say isn’t happening under the current setup.

They say the Board of Education is ideologically divided and inefficient as a result.

Democrat Fedor is against the bill.

She calls it an overreach by Republicans, likening it to the gerrymandering saga the state has been going through over the last year.

“It is clearly governmental overreach, done so quickly that the public doesn’t have the time to do the scrutiny and analysis and get back feedback from education specialists,” said Fedor.

She says a restructure of the board’s responsibilities would disenfranchise voters in the November election, especially as it is being pushed in a lame duck session.

“I represent 7 counties, six full counties, and so what they expected me to do and to provide for them isn’t going to be there,” said Fedor.

After the election, Democrats are set to control 7 of the 11 elected seats on the board.

The bill needs to pass in the state house before then, after which Governor DeWine has signaled he will sign it into law.