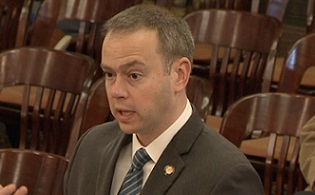 Cleveland Mayor Justin Bibb will renew his plans to expunge low-level marijuana records after supporting a change to the state law that had previously blocked him.

The provision was included with a host of criminal justice measures in Senate Bill 288, which Gov. Mike DeWine signed into law on Tuesday. Thanks to an amendment in the bill, prosecutors will now be able to request the sealing or expungement of fourth-degree or minor misdemeanor drug offenses.

Last year, the Bibb administration’s plans ran aground because state law laid the responsibility for seeking expungements on defendants, not prosecutors. When the law takes effect in 90 days, the city prosecutor and law director will be able to try again.

“We’re going to go through a very deliberative process to get this done right,” Bibb told Signal Cleveland on Wednesday.

The mayor said his administration will work with Clerk of Courts Earle B. Turner and Judge Michelle Earley, the presiding jurist in Cleveland Municipal Court, to process the cases. Originally, the city attempted to expunge more than 4,000 convictions.

The process isn’t automatic. A prosecutor applying to expunge a record must notify the offender and the victim, if any exists, giving both a chance to object to the expungement, according to the text of the legislation.

Then, a judge will hold a hearing. Before deciding to grant an expungement, judges must weigh whether the defendant has other pending charges, whether the government has a legitimate need for the records to remain open, and whether “the rehabilitation of the offender has been attained to the satisfaction of the court.”

After roadblocks, an opening in the state legislature

State Sen. Nathan Manning, the North Ridgeville Republican who chairs the Senate Judiciary Committee, said he reached out to the Bibb administration after reading about its attempts to wipe away small marijuana convictions.

“They immediately responded back,” Manning told Signal Cleveland. What followed was a bipartisan effort to allow prosecutors to seek low-level expungements through an amendment to Manning’s SB 288.

The mayor said that he and the city’s lobbyist made the case for the amendment to the GOP-controlled state legislature. Bibb spoke with Senate President Matt Huffman and then-Speaker Bob Cupp in early December, according to the mayor’s press secretary. Law Director Mark Griffin submitted testimony in November arguing that the change in the law would give many Clevelanders a “fresh start” at joining the workforce.

“I think that they saw the economic argument of what we were trying to do,” Bibb said. “These low-level marijuana convictions should not be a barrier to folks to get good quality housing, to apply for a student loan to go back to school, to apply for a loan to start a business.”

Manning credited Bibb for advocating for the measure, which remained in the final version of the bill that crossed the governor’s desk this week.

Major Democratic-led Ohio cities often view the Republican-controlled state government as an adversary. The preemption of local gun laws and cuts in state aid for local government yielded years of bad feelings toward the Statehouse from local Democratic officials.

But Cleveland leaders have also had breakthroughs in Columbus, such as when Mayor Frank Jackson won legislative support for his school system transformation plan in 2012.

Bibb spoke with state lawmakers throughout his first year in office, his public calendars show. Most recently, he gathered with many in Greater Cleveland’s Statehouse delegation in late December. The mayor said he spoke with the lawmakers about advocating for DeWine to veto a bill that would prevent cities from setting limits on tobacco products.

Bibb said he plans to advocate for gun laws and violence prevention through the Ohio Mayors Alliance. Also on his agenda is preserving Cleveland’s income taxes from state law changes that could undermine collections.

State Sen. Nickie Antonio, the Lakewood Democrat whose district covers much of Cleveland, attended the December meeting with Bibb. She described the gathering as the kind of meet-and-greet that can lay the groundwork for longer-term relationships.

“He is doing the work of a mayor-ambassador at this point,” Antonio, the new Senate minority leader, told Signal Cleveland. “He’s really moving around and saying, don’t sell Cleveland short. In fact, you should be paying attention, investing in and supporting what we’re trying to do, because if Cleveland is successful, it really contributes to the success of the state.”