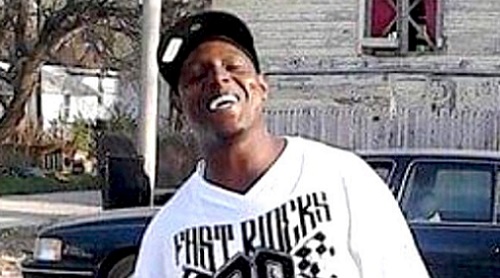 FEATURED PHOTO: EARL J. MOORE OF SPRINGFIELD ILLINOIS DIED OF ASPHYXIATION WHEN BEING TRANSPORTED FACE DOWN BY EMERGENCY MEDICS

Two emergency medical workers from LifeStar Ambulance Service, Inc. were charged Monday with first-degree murder in the Dec. 18 death of a Springfield man.

Finley and Cadigan were arrested Monday and are being held in the Sangamon County Jail on $1 million bonds.

Both face 20 to 60 behind bars if convicted.

Acts by Finley and Cadigan, which were captured on body cameras worn by three Springfield Police Department officers, resulted in the death of Earl L. Moore Jr., 35, of the 1100 block of North 11th Street, Wright said at a press conference at the Sangamon County complex Tuesday morning.

Moore died at 3:14 a.m. after being transported to HSHS St. John’s Hospital. He was pronounced dead by hospital personnel.

Moore died of “compressional and positional asphyxia due to prone face-down restraint on a paramedic transportation cot/stretcher by tightened straps across the back,” said Sangamon County Coroner Jim Allmon on Tuesday. Those findings, Allmon said, came from Dr. John Scott Denton, a forensic pathologist from Bloomington on Monday.

Finley and Cadigan knew, according to the criminal complaints read by Wright, “based upon their training, experience and the surrounding circumstances, that such acts would create a substantial probability of great bodily harm or death.”

Teresa Haley, president of the Springfield branch of the NAACP and its state director, said she thought there was a racial component to the actions of the EMTs because Moore was Black.

Watching the body cam footage, she said, reminded her of the murder of George Floyd in Minneapolis from 2020.

“I believe (the EMTs) were treating (Moore) rougher because he was Black,” Haley said following the press conference. “It was hostile to see the video and how they treated him.”

Roger D. Campbell, the president of LifeStar, said the company had no comment because of the ongoing investigation.

An original dispatch call came in for a residence in the 1100 block of North 11th Street at 2:02 a.m., Scarlette said. That call indicated there were multiple subjects at the residence with guns, Scarlette noted.

Upon arrival, Scarlette said, three SPD officers talked to a female resident who said Moore was suffering from hallucinations because of a medical condition. The female was a relative of Moore’s.

The officers were invited into the residence and within minutes of encountering Moore, radioed for an ambulance, Scarlette said.

Officers met Finley at the door and relayed to her information about Moore’s condition, Scarlette said.

Finley treated Moore “poorly and didn’t give him the care and compassion and respect he deserved,” Scarlette added. No medical treatment was rendered to Moore in the residence, he said.

Scarlette said EMTs told Moore that if he wanted to go to the hospital, he would have to walk to the stretcher, which was outside the home.

It was the officers, Scarlette said, who took turns getting Moore outside and placed him in “a recovery position, essentially lying him on his side on the stretcher.”

That, he said, transferred care to the EMTs.

Scarlette said the three officers waited until Moore was loaded into the ambulance before clearing the scene.

Haley said she thought of George Floyd when she watched the footage.

“They literally threw (Moore’s) hands behind and strapped him down. He couldn’t move if he wanted to and he’s face down,” Haley said.

“They did not show any compassion whatsoever to this individual. He should be alive today.”

Conversely, the three SPD officers on the scene, Haley said, “helped save (Moore’s) life as long as they could. The SPD did an awesome job. Without the body cams, we wouldn’t have this information, so we are grateful they responded the way they did. The officers did what they were supposed to do.”

Scarlette also commended the officers for the way they handled their portion of the call.

“They recognized this individual was suffering from some type of unknown medical condition and their mindset was immediately focused on compassion and empathy and patience,” Scarlette said.

A statement from Black Lives Matter SPI issued late Tuesday afternoon said it was “heartbroken to learn about the senseless killing” of Moore and supported the legal action taken against Finley and Cadigan to hold them accountable.

The statement added that “the Black community faces constant bias and racism in a variety of contexts, including while seeking medical treatment. This is exacerbated for those with co-occurring mental and substance use disorders. Unfortunately, this incident shines a light on how dangerous it can be for the Black community to seek treatment and received medical care.”

Haley said Moore’s socio-economic background definitely impacted the decisions of the EMTs when they showed up at this residence.

“You would have thought they would have gone over and said, ‘Are you OK?’ and checked his vitals and did some of those things. None of that was done,” Haley said. “They came in with a wrong attitude.

“Any injustice anywhere is something we as an NAACP are addressing. Everyone deserves to be treated with dignity and respect and they were not.”

Neither Finley nor Cadigan appeared to have any criminal histories in Sangamon County.

Their next court appearance is Jan. 19.

Illinois State Police is continuing its investigation into the case.