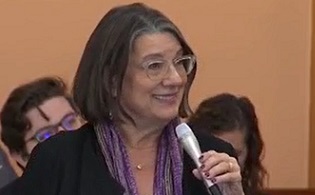 The Ohio Senate opened in January with its first openly LGBTQ minority leader.

State Sen. Nickie Antonio (D-Lakewood) has served in the Ohio legislature for a dozen years, first as a member of the House, and since 2018, as the assistant minority leader in the senate. Now the Northeast Ohio lawmaker is taking over for retiring Senate Minority Leader Kenny Yuko.

Antonio has advocated for LGBTQ issues in her role in both chambers, and, she admitted, that isn’t always easy in this legislature.

“Sometimes it’s frustrating, and there are times truly when it makes me sad, sad to think that we as a legislature, as a political and policy making body, would actually pass legislation that really minimizes and puts barriers in front of people to be their authentic selves and live their best lives,” Antonio said.

She’s referring to bills such as House Bill 454 which would have prevented doctors from providing gender affirming or gender transition care to minors. Antonio noted none of the bills that LGBTQ Ohioans have identified as being specifically hostile to them have actually passed the legislature.

“I’m a part of the reason why we’ve been able to push back,” she said. “We’ve been able to talk about these things and really try to prioritize what moves us forward instead of what takes us backwards.”

Antonio said this legislature has been able to push some objectives through that could lead to discrimination against certain minority groups, but she said bills like the one that would prevent transgender students from participating on girls’ sports teams have been blocked. One explanation, Antonio said, is that many Ohioans are learning more about the LGBTQ community.

“It’s interesting to think about the fact that 10 years ago, 20 years ago, we weren’t having these discussions. So one of the things that’s a positive is the fact that people have come out of the shadows. We talk about coming out of the closet. I always say there’s not a closet big enough to push us all back into,” Antonio said.

At the same time, protections for LGBTQ Ohioans have also been slow to gain ground.

Throughout her legislative career, Antonio has been a sponsor of what’s known as the “Fairness Act.” It would extend protections against employment and housing discrimination. That legislation hasn’t passed, but Antonio said she’s optimistic because during that time, the bill has gained support from many Republican-leaning groups, including the Ohio Chamber of Commerce.

“If we’re going to recruit and retain young people so that they want to not only work here, get educated here, but then raise their families here, we need to push forward with policies that reflect their values. And their values are that they appreciate and celebrate diversity and want to see the state that they live in do that as well,” Antonio said.

In addition to passing the Fairness Act, Antonio said her priorities include pushing for legislation that creates new jobs, ensuring people are paid a living wage and abolishing the death penalty. That last point is one on which some Republican lawmakers agree.

Republican Gov. Mike DeWine has stayed the execution of several people on death row, and there hasn’t been an execution during his time in office.

Antonio also wants to push for a more fair way to fund Ohio’s public K-12 schools. And while she and Republican Senate President Matt Huffman don’t see eye-to-eye on some issues, she said she has a good and respectful relationship with him.

And even if she can’t sing his praises all of the time, she said singing is not out of the question.

“He’s determined also to get me to come back to karaoke at some point. So, I think that’s in my future too,” Antonio said.