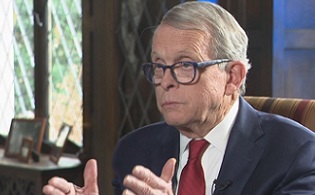 DeWine justified his decision by claiming “elections integrity is a significant concern to Americans on both sides of the aisle across the country.” He immediately went on to describe how good a job Ohio does administering elections. DeWine also took credit for provisions expanding access to IDs and nixing new ID requirements for absentee voters.

Like DeWine, Secretary of State Frank LaRose couched his comments in serving voters’ desires. “We are once again showing Ohioans that we take their concerns seriously,” LaRose wrote in a statement. Also like Dewine, LaRose regularly touts the integrity of Ohio elections while calling for new security measures.

It’s a contradiction critics have seized on repeatedly. If Ohio does such a good job and fraud is so rare, why impose new restrictions?

Jen Miller, who heads up the League of Women Voters of Ohio, argued in a statement, “this new law will not make elections more secure.”

“It will make them more administratively burdensome for elections officials, more expensive for taxpayers, and less accessible for voters,” she added.

In addition to photo ID language, the bill cuts the last day of early voting and extends hours the week prior. It also shortens the timeline for valid absentee ballots to arrive post-election. Miller argued the changes will be especially difficult for seniors, active military, people with disabilities, students, and rural voters.

Ohio House Minority Leader Allison Russo promised to “continue to fight any anti-voting legislation and defend the freedoms of all Ohioans.”

Despite signing the bill, DeWine seems intent on putting the matter to bed.

“I believe with the enactment of the new election integrity provisions in House Bill 458, this matter should be settled,” DeWine wrote, “and I do not expect to see any further statutory changes to Ohio voting procedures while I am Governor.”

PER THE COLUMBUS DISPATCH:

What does the election law do?

The bill would require voters to present a state-issued photo ID, U.S. passport, passport card or military ID to cast their ballot in person, although the ID doesn’t need to to have their current address on it. As part of that, any Ohioan 17 and older would be eligible to receive a free state ID card. Ohio licenses and ID cards must also note if the person is not a U.S. citizen.

Right now, voters can use alternative forms of identification at the polls, such as utility bills or bank statements. That would no longer be permitted.

A lot of unexpected things happen when lame-duck deadlines loom at the Ohio Statehouse. One of the most notable from December was the chicken bill that directs state agencies to allow natural gas drilling on their land.

The measure began as a way to reduce the minimum lot size for live poultry purchases from six chicks to three. A late amendment added language about drilling and designating natural gas as “green energy,” among other changes.

“As my administration has analyzed this bill,” DeWine argued in his signing statement, “I believe the amendments in House Bill 507 do not fundamentally change the criteria and processes established by the Ohio General Assembly in 2011 that first established the policy of leasing mineral rights under state parks and lands.”

The amendment shifts “may” to “shall” in state law. The idea is to force the hand of the state commission responsible for leases. DeWine, however, seemingly brushed off the changes, stating he’d instruct the commission to continue as usual.

“This bill is an egregious assault on executive authority, the public’s interest and our state parks and public lands. The bill also furthers fossil fuel misinformation campaigns designed to brand natural gas as ‘green energy,’ a nationwide effort to delay climate action and the transition to a truly clean energy future.”

OECAF’s Chris Tavenor spoke about the organization’s opposition prior to DeWine’s announcement. While he was clear they deeply opposed the policy changes, he seemed just as appalled at the policy making.

“If you’re going to do it, create a system,” he argued, “this is essentially forcing it through in order to ensure that oil and gas companies can get their profits as quickly as possible,”

“This is not about creating a process to ensure that state land is managed appropriately,” he said. “It’s about ensuring that oil and gas companies get access to the resources.”