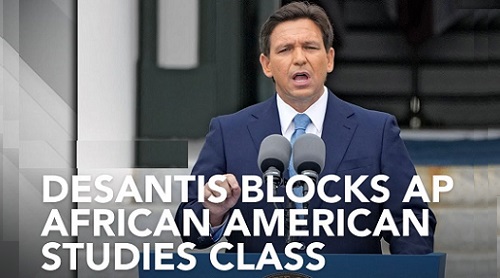 Gov. Ron DeSantis said Monday his administration rejected a new Advanced Placement course on African-American studies for high school students because some of the topics attempted to use Black history to push a political agenda.

Critics of the decision, however, say it is yet another politically motivated step the administration has taken to degrade the state’s education system, particularly on issues about race.

The political tug of war over the Advanced Placement course has reloaded the debate over how DeSantis is reshaping the state’s K-12 curriculum in an attempt to get rid of what he has called “indoctrination.” TOP VIDEOS “If you fall on the side of indoctrination, we’re going to decline. If it’s education, then we will do it,” DeSantis said at a press conference in Jacksonville.

As an example, DeSantis pointed out that the Advanced Placement course included elements of “queer theory,” discussions about abolishing prisons and lessons on intersectionality, a concept that refers to the way in which racism, sexism and classism can overlap and affect people.

“Now who would say that an important part of Black history is queer theory? That is somebody pushing an agenda on our kids,” DeSantis said. “When you use Black history to shoehorn in queer theory, you are clearly trying to use that for political purposes.”

The curriculum, which is being developed by the College Board, has not been released to the public. But in a document released by the Florida Department of Education on Friday, the state noted it objects to readings about many African-American scholars, activists and writers, and the inclusion of topics that the state says are foundational to critical race theory, which the state says “ranks people based on their race, wealth, gender and sexual orientation.” The Miami Herald is partnering with DailyChatter to connect you around the globe.

The state also singled out readings from Robin D.G. Kelley, a professor at UCLA who studies the history of social movement in the U.S., in part because his first book was “a study of Black communists in Alabama.”

The College Board said in a statement that the course is being tested in select schools and remains subject to changes as it continues to be finalized. But as currently written, DeSantis said, it is not acceptable in Florida because it is more focused on “ideology” than history. “We want to do history,” he said, noting that he personally views Black history as American history. “I don’t view it as a separate history.”

Many high-profile figures have spoken out about the decision. Vice President Kamala Harris — the first Black woman to serve in the nation’s second-highest office — criticized the decision while visiting Tallahassee on Sunday and said it was an action made by “extremist so-called leaders.”

“Anyone who bans teaching American history has no right to shape America’s future,” Harris said.

Jerome Adams, the former U.S. surgeon general under former President Donald Trump, questioned the “logic” behind what he called “selective/contradictory/politically motivated picking and choosing of when to apply school ‘choice’ and ‘freedom’ argument.”

The backlash has drawn the attention of other national figures, including Rev. Al Sharpton and Ben Crump, a high-profile attorney Sharpton has called “Black America’s attorney general” because he has become a voice for many Black people who have been killed by police.

Sharpton and Crump are planning to hold a “Stop the Black Attack rally” in Tallahassee on Wednesday on the steps of Florida’s Capitol.

The rally is likely to discuss more than just the Advanced Placement course rejection. Black lawmakers, including state Sen. Shevrin Jones, D-West Park, have long criticized what they say is an attempt by the state to “whitewash” American history.

In less than three years, the State Board of Education has barred lessons that deal with critical race theory, a 1980s legal concept that holds that racial disparities are systemic in the United States, not just a collection of individual prejudices, as well as lessons about “The 1619 Project,” a New York Times project that reexamines U.S. history by placing the consequences of slavery and contributions of Black Americans at the center.

Florida has also rejected math textbooks for what the state called “indoctrinating topics,” and schools and employers are limited in what they can teach about racism and other aspects of history under a law signed by DeSantis last summer.

The changes, DeSantis argues, are necessary because progressives have tried to infiltrate the education system with politically tinged topics that are departing from what he says is cut-and-dried education.

“How tired is it to sit there and think that just imposing some rote talking points from whatever the political skirmishes of the day are that that is a lasting form of education?” DeSantis said.