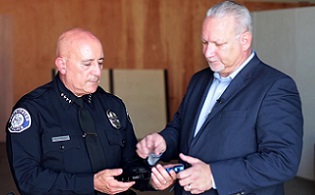 The BolaWrap is a handheld device that deploys an eight-foot-long rope to entangle a suspect from 10-25 feet away. The goal is to give officers a way to de-escalate situations from a safe distance.

“The tools that law enforcement current carries are pain compliance tools, meant to cause pain to gain an individuals compliance,” says Mike Rothans of manufacturer Wrap Technologies. “This device is meant to retrain somebody from a safe distance so that they won’t pose that threat that would cause officers to use those additional levels of force.”

Law enforcement agencies in more than 33 states already use BolaWrap. In Ohio, authorities in West Carrollton, Brice, Centerville and Westchester all have the devices.

“It’s in over 120 police departments throughout the united states,” Rothans says. “And currently it’s been purchased by 23 international countries.”

The Ohio State Patrol and police departments in Worthington, Gahanna, Pataskala and Columbus have expressed interest.