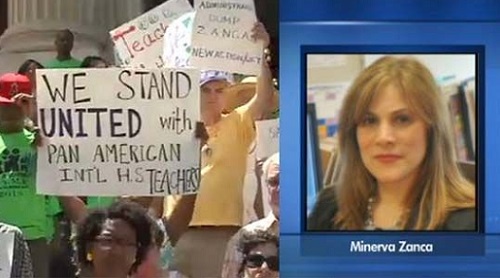 In a perfect world, being an unrepentant racist would disqualify people like Minerva Zanca from ever working in the public school system. Sadly, not only was she gainfully employed, but she was the principal at Pan American High School in Queens, N.Y.—and her alleged racist behavior just cost the city more than a million dollars after it reached a settlement on her behalf with her former employees.

The New York Daily News reports that Zanca deliberately targeted black teachers and assistants with “racist insults and retaliation,” because that’s exactly the type of thing that racist school administrators tend to do:

The hefty payout comes after the federal Justice Department filed a lawsuit against the city Education Department in 2016 for allowing a “pattern and practice of discrimination” to flourish at Pan American High School during the 2012-13 school year.

Three teachers and one assistant principal said they suffered the wrath of former school principal Minerva Zanca, who was allegedly determined to force out black teachers with negative performance evaluations.

Former assistant principal Anthony Riccardo also alleges that he was removed from the school by security after he refused to give three black teachers poor evaluations. In turn, he received one himself and was awarded a $175,000 settlement, according to a spokesman from the city Law Department.

There are also these accusations that we reported on when they first surfaced back in 2016:

Zanca allegedly told Riccardo that one teacher, Heather Highwater, “looked like a gorilla in a sweater.” She is also accused of asking Riccardo if he had seen teacher John Flanagan’s “big lips quivering” during a meeting.

She also allegedly made comments about Highwater’s hair, saying that she could never have “[f—king] nappy hair.”

As a result of these actions, Hightower will receive a $362,500 payout while Flanagan will receive $500,000, the city Law Department confirmed.

In an official statement provided to the Daily News, however, it would appear that the department settled the lawsuit while refusing to acknowledge that discrimination of any sort had ever taken place.

“The Department of Education is committed to supporting people of all backgrounds. Based on our assessment, these teachers were not discriminated against. The parties have decided that ending this legal matter was in their best interests.”

One of Zanca’s victims, former teacher Lisa-Erika James, has refused to settle thus far and will take her case to trial in February. The federal Justice Department’s case against the city also remains active and the feds are seeking an order to prevent this type of thing from occurring again in the future.

If only racism had a cure.

Menace to supremacy. Founder of Extraordinary Ideas and co-host and producer of The Extraordinary Negroes podcast. Impatiently waiting for ya’ll to stop putting sugar in grits.