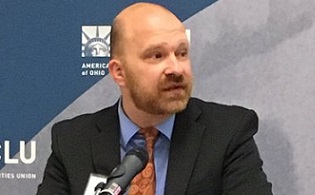 The ACLU of Ohio is collecting complaints from inmates in Ohio through a new hotline and the organization is already pressing the state to play more of a role overseeing county and municipal jails through the coronavirus outbreak.

After just 24 hours, the civil rights organization has received 14 complaints from the new e-mail address. Combined with regular communications channels, the ACLU has about 30 coronavirus-related messages from Ohio’s jails and prisons.

“And so while our concern is everywhere, our biggest concerns lie not with Ohio prisons but with Ohio jails,” said the group’s chief lobbyist, Gary Daniels.

The complaints have focused on poor hygiene and a lack of isolation space for sick people at county and municipal jails across the state.

“It is quite clear that there are many jails, and I assume that we will learn about many more, that are entirely unequipped to deal with this problem,” Daniels said.

The ACLU of Ohio issued an open letter with recommendations for policies at jails, along with other parts of the justice system.

While the state’s prisons are managed by the Ohio Department of Rehabilitation and Corrections (ORDC), there is no statewide authority managing county and municipal jails.

The state’s prisons have enacted a series of measures meant to prevent an outbreak, including enhanced cleaning, screening all prisoners they enter prisons and suspending in-person visitation – to be replaced with phone or video calls instead.

“I mean what we’re trying to do is to keep our operations as normal as we can while still keeping people safe and making ways for people to have communications with their loved ones,” said ODRC Director Annette Chambers-Smith.

According to Chambers-Smith, if any inmate is diagnosed with coronavirus or is under investigation, they would be quarantined in the prison’s infirmary. Any inmate sent from a county jail to prison who is ill upon arrival would be sent back to the jail.

Some local authorities, including Cuyahoga County, have begun clearing space for possible quarantine and put in enhanced hygiene policies.

ODRC has suspended regular jail inspections but will respond to complaints.