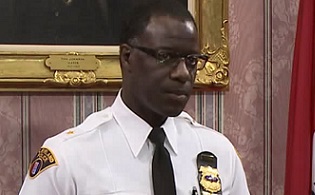 The FBI on Friday arrested two out-of-state men, accusing them of bringing weapons and flammable materials to Saturday’s protest in Downtown Cleveland.

According to the Bureau’s Cleveland office, agents arrested Brandon Long and Devon Poland in Erie, Pennsylvania Friday morning. The pair were stopped Downtown on the night of the protests by Cleveland police officers after the curfew was put in place.

Their car was searched and police found a legally owned handgun, bullets, liquid fire starter, a hammer and a bottle of alcohol that officers believed was stolen during the looting that night.

The arrest warrant was partly based on the Facebook messages obtained after the FBI later got a search warrant for Long and Poland’s phones.

“None of the messages exchanged between Mr. Poland and Mr. Long mentioned how their travel to Cleveland was to memorialize and honor the memory of George Floyd,” said FBI Special Agent in Charge Eric B. Smith. “The sole aim was to fan the literal flames of rioters because, and I quote from their messages, ‘It’s a once-in-a-lifetime thing.’”

The pair is charged with transporting a weapon to use in civil disorder, conspiring to set a fire as part of a felony and using a telecommunications device to plan or assist a riot.

It’s not clear why they were not arrested on Saturday night for breaking curfew. There are no charges filed against them in Cuyahoga County Court of Common Pleas, according to the online docket. Cleveland police have not responded to ideastream’s request for information.

According to the affidavit, Long and Poland did not appear to be involved in planning any violence, the decision to come to Cleveland was last minute:

a. At approximately 5:17 p.m., ALTHOF LONG messaged POLAND asking, in sum and substance “Wanna go to Pittsburgh and watch the riots;”

b. At approximately 5:19 p.m., POLAND replied, in sum and substance, “Is there actually riots? IK (I know) philly is wilding;”

d. At approximately 5:24 p.m. POLAND responded, in sum and substance, “I wanna s**t kinda but my future wife needs me;”

e. At approximately 5:25 p.m., ALTHOF LONG responded, in sum and substance, “This is a once in a life time thing you can witness and maybe participate in;”

f. At approximately 5:25 p.m., ALTHOF LONG posted to POLAND, in sum and substance “Or tell her you gotta go overthrow the govt first;”

g. At approximately 6:10 p.m. and 6:11 p.m., ALTHOF LONG wrote to POLAND, in sum and substance, “Unless things change. Cleveland seems like a better spot to riot watch. Police shooting teargas and flash bangs, Pittsburgh hasn’t had much of that;”

h. At approximately 7:09 p.m. ALTHOF LONG messages POLAND about buying supplies for their travel to Clevleand, he asked if POLAND wanted goggles, POLAND replied “Yes,” and also asked for “a bandana” and a “backpack;”

i. At approximately 7:10 p.m. POLAND messaged ALTHOF LONG asking, in sum and substance, “Should we bring Molotov supplies?”

j. At approximately 7:17 p.m. ALTHOF LONG responded, in sum and substance, “Sadly enough I think I have everything needed for a Molotov in my car. Like normally;”

l. At approximately 7:50 p.m. and 7:56 p.m. ALTHOF LONG responded, stating, in sum and substance, “Cleveland is more lit anyway,” and “And if not Pittsburgh then we can hit Cleveland OH.”

According to FBI Agent Smith, there is no evidence that Long or Poland started any of Saturday’s fires in Downtown Cleveland.

The investigation is ongoing and the FBI has several more ongoing investigations into Saturday’s protest, Smith said.

The City of Cleveland’s anti-terrorism unit was involved in the investigation, said Cleveland Chief of Police Calvin Williams and Mayor Frank Jackson, who were part of the FBI’s press conference Friday.

“The work is just starting,” said Williams. “There’s still a lot of folks out there that came here with the intent to tear down our city. We’re not going to let that happen.”

The city arrested five people early Friday morning attempting to break into Progressive Field, Williams said. The group, who are from outside Cuyahoga County, had fire starters, extinguishers and were carrying protest signs, he said.