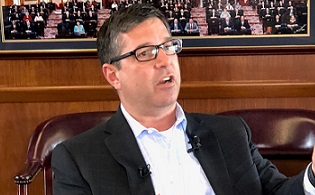 I grew up in Lakewood, but many of my friends lived farther west, in Rocky River, Bay Village and Westlake. We were teenagers during the George W. Bush years, and I always thought of these towns as more conservative-leaning places.

For a time, they were. Bush won all three of those West Shore suburbs in 2004.

But 2020 is different. Joe Biden, now the president-elect, didn’t just win Bay and River; he won every precinct, and he carried Westlake, too. Judging by Biden’s performance in suburbs around the country, it appears that the Bays, Rivers and Westlakes of America made a similar decision.

Democratic activists in the West Shore suburbs have told me Hillary Clinton’s 2016 defeat energized them. They banded together on social media, branded themselves the “Bay Village Nasty Women” and canvassed their neighborhoods.

That work appears to have paid off. Democratic candidate Monique Smith walked away from Election Night with a narrow lead over Republican State Rep. Dave Greenspan. We’ll see later this month whether provisional ballots and outstanding absentees can close that gap.

If Smith’s advantage holds, it will be one of the few blue victories on Ohio’s reddening map.

But that’s only part of the story. South of I-480, the suburbs shifted in the other direction. Look at Parma. Twenty-four years ago, Bill Clinton’s Ohio campaign manager, Tony Cuda, told Newsday Parma was “the swingingest swing city in Ohio.”

This year, Parma continued its swing toward Donald Trump, delivering the president a 5-point victory in a city that picked Obama by double digits twice.

Mayor Tim DeGeeter, an early Biden endorser, told me his constituents have been labeled “Reagan Democrats.” From the sound of his voice, I couldn’t help but think he’d done this interview a few too many times before.

Today, they may have a different label: Trump Republicans.

Patty Gascoyne, a Parma Republican, foretold this about Trump in a pre-election interview with me: “I think we’re going to see a bit more oomph than you hear about in the media. That’s my prediction.” With unofficial Ohio election results now in front of us, I think she had a point.

Even so, Parma’s local leadership is flush with Democrats. Democratic state Rep. Jeff Crossman, whose district includes Parma, fended off Republican challenger Kevin Kussmaul. And the “Parma Democrats” are still said to wield plenty of power within the Cuyahoga County party.

Likewise, Republicans are holding down jobs as mayors in Bay Village, Rocky River and Westlake.

Some pundits have proposed replacing the political cliché “all politics is local” with its opposite, “all politics is national.” That may not be the reality on the ground in Northeast Ohio yet. Local incumbents are hard to topple. But if Trump maintains post-presidency political sway, I wouldn’t be surprised if that starts to change.

Nick Castele’s “Door To Door” column will appear monthly in Noon(ish) and online at ideastream.org.