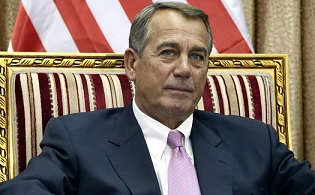 An invitation obtained by Politico revealed Boehner wias a special guest at a virtual fundraiser for Rep. Anthony Gonzalez (R-Ohio). Gonzalez was one of 10 House Republicans who voted to impeach Trump this year and, perhaps unsurprisingly, Trump is now backing a primary challenge against the congressman. Max Miller, a former Trump White House aide, is the candidate hoping to unseat Gonzalez.

Boehner, it seems, will look to stick up for the non-Trump wing of the Republican Party, following the lead of his old colleague and successor, former House Speaker Paul Ryan (R-Wisc.), who showed up Thursday at an event for Rep. Liz Cheney (R-Wyo.), a primary target of the Trump-aligned members of the House GOP both because of her impeachment vote and the fact that she has refused to back down from criticizing the former president.

All told, the involvement of Boehner and Ryan, even though they’re no longer active lawmakers, reflects the growing intra-party battle between the old guard and the new. Read more at Politico.