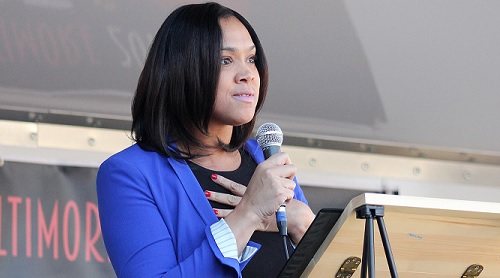 A federal investigation is reportedly underway with Baltimore’s top prosecutor and her politician husband at the center of the probe.

Marilyn Mosby, the state’s attorney for Baltimore, and her husband, Baltimore City Council President Nick Mosby, are being investigated for potential campaign finance violations, according to Baltimore Sun reporter Justin Fenton tweeted Friday afternoon (March 19). He described the husband, 43, and wife, 41, as “Baltimore’s power couple” and added that there were “authorities issuing subpoenas for financial information as well as to city churches.”

The Mosbys’ lawyer called the investigation a “political witch hunt in its purest form” and said his clients had committed no wrongdoings. The full statement from the Mosbys’ attorney follows below.

“On behalf of Nick and Marilyn Mosby, my clients are progressive change agents, making them unfair targets of unnecessary scrutiny by federal investigators. Nevertheless, I can assure you and the people of Baltimore, they have done nothing illegal, inappropriate, or unlawful. This is a political witch hunt in its purest form, and both of them will vigorously, and fully defend themselves. In the interim, I’ve advised them to refrain from making any further comments, on these matters. As they’ve done with every other baseless charge and investigation lodged against them, they have every intent to fully cooperate with the investigation, to fight for the truth to come out, while continuing to fight for the citizens of a city that they both love, and are blessed to serve.”

Union Baptist Church in Baltimore was subpoenaed and its lawyer told the local Fox News affiliate that investigators wanted to know how much money the Mosbys give to the house of worship.

“I spend more monthly at Starbucks than the Mosby’s gave during the time period,” the attorney, Robert Fulton Dashiell, said, adding that the total was less than $200.

It was not immediately clear if that allegation is connected to the reported federal investigation of the Mosbys.

Fox Baltimore listed a number of instances where the Mosbys found their actions under heightened scrutiny, including suspicions of campaign finance violations when it came to receiving gifts, paying taxes and traveling, for example. However, none of the accusations have ever been proven.

Last year, Mosby led a group of her fellow Black women prosecutors from around the country to publicly state their support for St. Louis Circuit Attorney Kim Gardner filing an unprecedented federal civil rights lawsuit, accusing the city, the local police union and other parties of an orchestrated and racist conspiracy aimed at forcing her out of office.

“Every prosecutor here has had similar experiences to Kim. We’ve lived through the personal, professional, ethical attacks on our competency and our leadership abilities and are in many cases still living through these attacks, and yet we are here to tell Kim and everyone else, we shall not only overcome, but collectively we shall prevail in reforming the criminal justice system,” Mosby said around that time.

This is a developing story that will be updated as additional information becomes available (Wright, 2021).