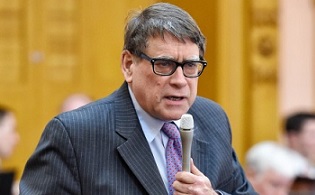 Ohio has joined the list of states where Republicans want to make changes to voting laws after the 2020 election – with a bill that has appeal for both parties, though some that Democrats have spoken against it.

In his request to fellow representatives to co-sponsor his bill, Rep. Bill Seitz (R-Cincinnati) wrote he isn’t challenging the election of President Joe Biden. Seitz said Donald Trump won Ohio by eight points in “a fair and fraud-free count”.

He’s proposing online absentee ballot requests and moving the request deadline from the Saturday before the election to 10 days before. County boards of elections and voting rights advocates had urged voters to request absentee ballots early last year because of concerns about slowdowns with the U.S. Postal Service and voters responded in record numbers.

But the bill also would limit ballot drop boxes to one per county, while Democrats had wanted to expand them, and drop offs would be available only for 10 days before the election.

Republican Secretary of State Frank LaRose said last year he’d like to install more if he had the ability to do so without legislative approval. Then he told counties they couldn’t add them. A lawsuit was filed but was dropped. Right now, LaRose’s directive allowing only one drop box per county remains in place.

Seitz’s bill also would cut in person voting the day before the election, though those hours can be scheduled another day. County boards of elections have suggested they’d like more time to prepare for Election Day crowds.

It also would allow for automated voter registration through the Bureau of Motor Vehicles rather than all adults being automatically registered to vote, which Democrats have wanted. LaRose advocated for a system that would register voters at the BMV not long after he was elected in 2018.

Progressive groups claimed to have gotten an earlier version of the bill that would ban drop boxes entirely and require two forms of ID for in-person early voting.

Ohio Democratic Party chair Liz Walters blasted the proposal in a statement that said, in part: “In a state that has set the bar for extreme anti-voter laws, this proposal actively takes steps to put Ohio further back in the fight for access to the voting booth.”