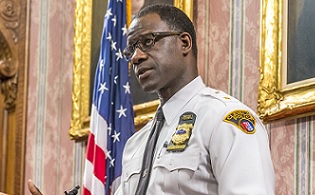 Opposition to a proposed police oversight amendment was on full display at a Cleveland city council meeting last week.

Opponents described the proposed amendment, Issue 24, as handing over vast authority on police discipline, hiring and policies to a permanent Cleveland Community Police Commission (CPC), taking authority away from the police chief and public safety director.

“While it’s being offered as a means to provide a voice to citizens, it actually strips the citizens of their voice and nullifies their votes for mayor and city council,” Public Safety Director Karrie Howard said.

The CPC was created by the federal consent decree in 2015 to collect community input and make policy recommendations to Cleveland police.

The Citizens for a Safer Cleveland amendment, which will appear on the November general election ballot, would add the CPC to the city’s charter and give it authority over police discipline and policies. It would have the authority to launch investigations into individual police officers, issue subpoenas and award grants to community organizations.

Under the current system, complaints about officer misconduct are investigated by the Office of Professional Standards (OPS). The Civilian Police Review Board uses OPS’ report to either clear the officer or recommend discipline based on the department’s disciplinary guidelines. That recommendation goes to Police Chief Calvin Williams. The board can appeal Williams’ decision to Director Howard, who has final say.

Under issue 24, the CPC would have authority to start an investigation without a formal complaint being filed, investigate the histories of individual officers and compel city officials to cooperate. The amendment’s primary author, Subodh Chandra, said the CPC would, in practice, serve as a final layer of oversight after a complaint has gone through the existing system.

“The [Community Police] commission can only really act in the disciplinary realm in response to a complaint that comes before it, say from an alleged victim, that says, ‘Listen, I wasn’t satisfied with the discipline that was meted out by the chief or the civilian police review board or the safety director,’” Chandra said.

Director Howard, who opposes the measure, says it gives the CPC unfettered power that could violate officers’ rights.

The amendment’s supporters say there is oversight of the commission. Its members are appointed by the mayor and approved by city council. The commission would have to follow police department policies and their decisions would still be subject to arbitration under the city’s police union contracts.

The two candidates for mayor have taken opposite positions on Issue 24, with Justin Bibb coming out in support early in the campaign and Kevin Kelley opposing it.

Chief Williams told councilmembers the city is already short 150 officers and, if the amendment passes, staffing issues would worsen.

“Officers are going to leave this division in droves — good officers — because they see this as bad, bad legislation,” Williams said. He went on to compare oversight of the police department to oversight of the U.S. Military. “The president does not decide what discipline a soldier gets in the Marine Corps or the Air Force. He lets his generals do their job.”