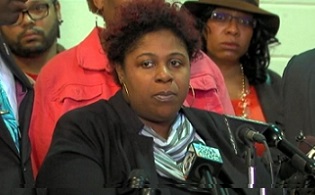 FEATURED PHOTO: SAMARIA RICE MOTHER OF TAMIR RICE WHO WAS GUNNED DOWN IN 2014 IN TEN SECONDS FOR PLAYING WITH A TOY GUN

Supporters of Issue 24 demanded an apology Friday from Cleveland Mayor Frank Jackson after he described the proposal’s supporters as “tragedy pimps.”

Jackson said during an Oct. 8 interview on The Outlaw Radio Program that campaigners are taking advantage of Black suffering to advance their own political goals.

“Those people who have a certain political philosophy, they use the legitimate issue of the oppressed — and in this case Black people — to promote their politics, not to assist the oppressed. They just use the oppressed for their own benefit,” Jackson said during the interview. “Tragedy pimps, that’s what they are. They take our tragedy and they pimp it to their own benefit, as if they care. Get out of my face.”

Jackson didn’t say who specifically among the measure’s backers fit that description. The mayor’s office did not respond to a request for clarification.

The issue’s backers organized a press conference Friday outside the Cuyahoga County Board of Elections where early voting is currently taking place, to respond to the mayor’s attack.

“So now we’re ‘tragedy pimps?’” said Alicia Kirkman, whose son Angelo Miller was killed by Cleveland police in 2007. “It’s unacceptable. We are here to make a difference for the city of Cleveland. We are here to save lives.”

The proposed charter amendment, which appears on the November ballot, would give the Community Police Commission ultimate authority over officer discipline and policies, a dramatic expansion of its current role. The consent decree with the U.S. Department of Justice created the CPC in 2015 to offer recommendations to Cleveland police based on community feedback.

In the radio interview, Jackson went on to say the consent decree was meant to deal with the accountability and use-of-force issues that Issue 24 organizers are seeking to address.

“This stuff they’re talking about, though, is crazy,” Jackson said.

“This initiative is led by the families, it is not led by outsiders,” Rice said. “Frank Jackson, you owe us an apology, publicly.”

Issue 24 is facing an onslaught of attacks from its opponents. At a recent City Council Safety Committee meeting, Public Safety Director Karrie Howard, Chief of Police Calvin Williams and several councilmembers argued the measure would lead officers to flee the department.

“They’re using that as a scare tactic,” said Brenda Bickerstaff, whose brother was killed by Cleveland police in 2002. “They want to make the public believe voting for this is going to be a devastation for the city. It’s not.”

If the city is worried about officers leaving, Bickerstaff said, they should increase officer pay and offer better training.

Issue 24 also guarantees a minimum yearly budget and sets rules for hiring and firing the 13 members of the commission.