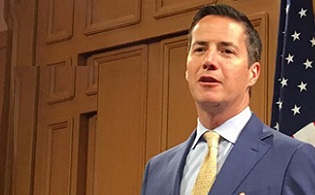 One of the nine Republicans who filed paperwork to seek the party’s nomination for US Senate on Wednesday has announced he’s out of the race. Cleveland tech entrepreneur and high-end car dealer Bernie Moreno is the first candidate to drop out.

Moreno sounded optimistic as he filed petitions at the Secretary of State’s office last Wednesday.

Moreno said in a statement: “I asked for a private meeting with President Trump this afternoon to discuss the state of the Ohio Senate race. I am a businessman, not a politician. Business leaders recognize patterns before they happen. After talking to President Trump we both agreed this race has too many Trump candidates and could cost the MAGA movement a conservative seat…I am ending my U.S. Senate campaign and will return to the private sector. I will focus my efforts on supporting the candidate that wins President Trump’s endorsement.”

Trump praised Moreno’s decision in a statement on his website that was also emailed to reporters.

Moreno was the leading fundraiser in the first few months after he entered the race, but struggled to gain attention. He started a $4 million ad campaign in December, but he hadn’t run any ads since January 16. His January 31 Federal Elections Commission filing reflected he’d loaned his campaign $3.75 million.

In a recent ad, Moreno said, “President Trump says the election was stolen and he’s right”, an untrue statement that has been disproved through court cases, audits and fact checks. Moreno reportedly tweeted before the election that conservatives should accept that the 2020 election was over, but deleted those tweets.

Moreno also said in his statement: “This decision may surprise some, but it is what I feel gives us the best chance of success.” With fewer pro-Trump candidates in the race, voter support could consolidate behind the candidate Trump does endorse.

All five leading GOP candidates remaining are millionaires, but only Sen. Matt Dolan has said he’s not seeking Trump’s endorsement. Trump said he wouldn’t endorse Dolan, a part owner of the Cleveland Guardians, because of the team’s name change.