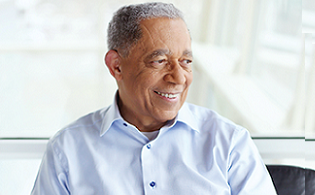 It’s was a big day for 3News’ Leon Bibb!

Standing under the street sign bearing his name, Bibb recounted some of his childhood memories growing up at a home just down the street.

“My childhood home was just a comfortable walk from the shores of Lake Erie, which call my family and friends to its wide-sweeping magnitude and its beauty. It was a wonderful childhood on this street, which my parents called a street of dreams. I don’t remember much about moving here when we moved here because I was only 3 years old.”

He did remember, however, arriving to the home in a taxi cab with his mother while his father traveled there in the moving truck because they did not own a car at the time.

“My folks selected this house on Parkgate down the street at 9122 because it was a quiet neighborhood with a good elementary school right across the street,” he continued. “My father taught me about following the rules and sticking to what you want to do. My mother taught me about how to be kind. I think about the house on Parkgate Avenue, which was our home through all of my years until I reached the age of 18 and went off to college. I think not only of my blood family, but there was a brotherhood. There was a brotherhood that I shared with my friends here.”

We streamed the entire street naming dedication ceremony live, which you can watch in the player below:

Chants of “Leon! Leon! Leon!” were heard in the moments before the street naming dedication began. Cleveland Mayor Justin Bibb, a relative of Leon’s, also said a few words.

“My cousin, Leon, is certainly a titan in the Bibb family and a titan in Cleveland,” Mayor Justin Bibb said at the dedication ceremony. “When I think about the contributions he’s made to this state and this city, the biggest thing I think about is one word: Service. He served this country, like my father, in the Vietnam War. He was the first Black anchorman in the state of Ohio. He has always made sure that our family lived up to this legacy of service.”

The honorary designation of Leon Bibb Way was initially announced last October as 3News marked his milestone 50 years in television.

Former 3News reporter Tom Beres was also there for the dedication.

“I never expected anything like this,” Bibb said. “You know, people say, ‘how did you last 50 years?’ And I say, one day at a time.

Congratulations! We are so proud of you!