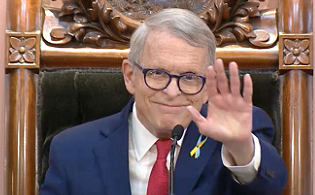 Gov. Mike DeWine was not my choice.

Until recently, though, I believed that he put the people of Ohio first, even if it was unpopular or not the way I thought any issue could be handled. Then he refused to stand up for sensible gun control. Sorry, Mike, no more.

I will now be using three issues before deciding who gets my vote:

Issue one: Sensible gun control. No one needs an automatic weapon, period.  All weapons need to be registered. No one is coming for your guns, stop the lying about it and stop believing this. I grew up with guns, I have no objection to gun ownership, but I repeat, no one needs an automatic weapon, or a legal way to alter a weapon to create such a weapon.

Issue two: Abortion is a medical issue; it does not belong in a courthouse. Stop lying about it being all about the babies. If that were true, we would have adequate health care for mothers and children, affordable childcare, preschool across the board. It is not about the babies.

Issue three: Climate control. Stop rolling back regulations, enact a few more, get rid of as much plastic as possible as soon as possible. Tax incentives for upgrades to utilities that lower costs to all of us.

Anyone running for office who does not agree with these things or does the old soft-shoe of hemming and hawing instead of a simple yes or no (by the way, all that means is a strong no) will not be getting my vote. Anyone care to join me?