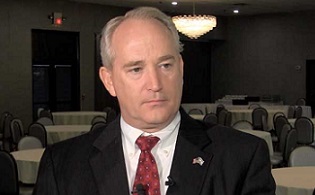 The Democratic nominee for Ohio attorney general filed a criminal complaint against the five Republican members of the state’s redistricting commission last Thursday, a day after the Ohio Supreme Court rejected the commission’s legislative maps for the fifth straight time.

State Rep. Jeff Crossman said the filing seeks charges of dereliction of duty and of civil rights interference, on grounds that gerrymandering in Republicans’ favor dilutes Democratic votes, harms voter confidence and prevents all votes from being equal. He has framed his campaign against Republican Attorney General Dave Yost as a fight against corruption in Columbus.

“It’s time to hold these politicians accountable and show that no one is above the law!” he tweeted.

Ohio’s map fight comes amid the once-per-decade political mapmaking process that all states must undertake to reflect population changes from the census. A combination of Republican foot-dragging and legal wrangling has extended redistricting well into the 2022 election season and stymied Ohio’s legislative primaries. Maps were supposed to be completed last fall.

Crossman said he filed the complaint with Columbus City Attorney Zach Klein, a fellow Democrat, at the direction of the Ohio State Highway Patrol.

The filing did not target Democratic members of the commission, who opposed all five plans for Ohio House and Senate district boundaries. It did, however, target Faber — despite his votes against the last three of five plans for legislative districts.

In last Wednesday’s ruling, the Ohio Supreme Court accused GOP members of the Ohio Redistricting Commission of “a stunning rebuke of the rule of law,” after they resubmitted previously rejected maps in response to a court order. The high court has said, however, that Ohio’s new redistricting guidelines gave it no legal power to hold commissioners in contempt, nor to draw alternative maps itself.

Justices have ordered the commission to draw a brand new plan by June 3. At the same time, a federal court previously said that it would intervene and impose the previously invalidated maps if the state dispute isn’t resolved by this Friday. It wasn’t immediately clear how the conflicting court deadlines would play out.

The Ohio Republican Party criticized Crossman for plugging the criminal complaint a day after missing votes on two proposed constitutional amendments: one revising rules on bail for criminal suspects, and one restricting noncitizens from voting in local elections. Crossman reported to Cupp mid-session that he had become ill.

“Jeff Crossman faking an illness to avoid voting on legislation that will impact public safety and the integrity of Ohio elections is a slap in the face to his constituents and voters across Ohio,” spokesman Dan Lusheck said in a statement. “It is amazing that he recovered in time to keep campaigning despite shirking his official duties.”