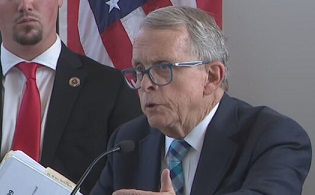 “We have a lot of requests from schools to allow this to be done,” said Gov. Mike DeWine.

The law reduces the hours of training from 700 hours to 24 hours, followed by 8 annual hours of requalification training plus yearly criminal background checks.

The training would also include how to stop an active shooter, de-escalation techniques, and first aid care.

“I had a conversation with a school administrator, post-Uvalde. They talked about the fact that it was a long time before help arrived and how they wouldn’t want Ohio law to deny them the ability to defend themselves and their students,” said Lt. Gov. Jon Husted.

Many educators have been fighting the new law, saying it makes it easier for guns to get into schools.

“I am disappointed. I wish I could say I was surprised,” said Scott DiMauro, Ohio Education Association President. “We are setting school employees armed in our schools up for disastrous consequences if we see a lot of districts move forward with this very, very low training standard.”

DiMauro said he feels 24 hours isn’t enough and worries mistakes could be made.

“We already have seen, around the country, a number of incidents where there have been accidental discharges of weapons by people who were authorized to carry them in schools. So, the more you have guns in schools, the more likely it is that those guns are going to fall in the wrong hands,” said DiMauro.

State Rep. Thomas Hall, the lawmaker behind House Bill 99 said they picked 24 hours for a reason.

“We didn’t pull a number out of a hat kind of thing. We actually did a lot of research into what schools were doing already in Ohio before the Supreme Court decision and that’s why we put the provisions in the bill today,” said State Rep. Thomas Hall (R- Madison Twp).

Ohio law did not previously address training for this third category of individuals. However, the Ohio Supreme Court started requiring more than 700 hours of basic peace officer training last year.

“The vast majority of that training is not really relevant to school safety directly. For example, those training hours include driving courses, patrolling of police cruisers, stopping vehicles in traffic,” said DeWine.

DeWine made it clear that the bill does not mandate the arming of school staff members but leaves the decision entirely to local school boards. Districts can also require more than 24 hours of training.