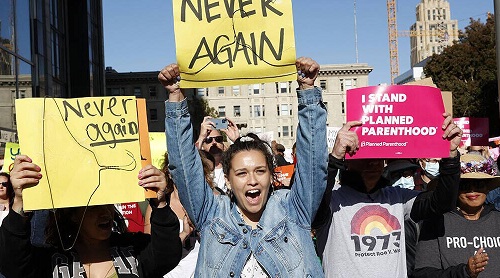 The U.S. Supreme Court officially reversed Roe v. Wade on Friday, declaring that the constitutional right to abortion upheld for nearly a half century, no longer exists.

Writing for the court majority, Justice Samuel Alito said that the 1973 Roe ruling and repeated subsequent high court decisions reaffirming Roe “must be overruled” because they were “egregiously wrong,” the arguments “exceptionally weak” and so “damaging” that they amounted to “an abuse of judicial authority.”

The decision, most of which was leaked in early May, means that abortion rights will be rolled back in nearly half of the states immediately, with more restrictions likely to follow. For all practical purposes, abortion will not be available in large swaths of the country. The decision may well mean too that the court itself, as well as the abortion question, will become a focal point in the upcoming fall elections and in the fall and thereafter.

Joining the Alito opinion were Justice Clarence Thomas, appointed by the first President Bush, and the three Trump appointees — Justices Neil Gorsuch, Brett Kavanaugh and Amy Coney Barrett. Chief Justice Roberts, appointed by President George W. Bush, concurred in the judgment only, and would have limited the decision to upholding the Mississippi law at issue in the case, which banned abortions after 15 weeks.

“With sorrow — for this Court, but more, for the many millions of American women who have today lost a fundamental constitutional protection — we dissent,” they wrote.

Indeed, the 78-page opinion, which has a 30-page appendix, seemingly leaves no authority uncited as support for the proposition that there is no inherent right to privacy or personal autonomy in various provisions of the Constitution — and similarly, no evidence that peoples’ reliance on the court’s abortion precedents over the past half century should matter.

Alito pointed for instance, to Planned Parenthood v. Casey, the 1992 decision that upheld the central holding of Roe and was written by Justices Sandra Day O’Connor, Anthony Kennedy and David Souter, all Republican appointees to the court. Alito pointed to language in the Casey opinion that he said “conceded” reliance interests were not really implicated because contraception could prevent almost all unplanned pregnancies.

In fact, though, that 1992 opinion went on to dismiss that very argument as “unrealistic,” because it “refuse[s] to face the fact” that for decades “people have organized intimate relationships and made choices … in reliance on the availability of abortion in the event that contraception should fail.” Not exactly the concession that Alito described.

It is not unusual for justices to cherry pick quotes but not so out of context and not from former colleagues who are still alive and privately, not amused at all.

In the end, though, Alito’s opinion has a larger objective, perhaps multiple objectives.

Writing for the majority, he said forthrightly that abortion is a matter to be decided by states and the voters in the states. “We hold,” he wrote, that “the Constitution does not confer a right to abortion.” As to what standard the courts should apply in the event that a state regulation is challenged, Alito said any state regulation of abortion is presumptively valid and “must be sustained if there is a rational basis on which the legislature could have thought” it was serving “legitimate state interests,” including “respect for and preservation of prenatal life at all stages of development.” In addition, he noted, states are entitled to regulate abortion to eliminate “gruesome and barbaric” medical procedures; to “preserve the integrity of the medical profession”; and to prevent discrimination on the basis of race, sex, or disability, including barring abortion in cases of fetal abnormality.

Ultimately, the translation of all that is that states appear to be completely free to ban abortions for any reason.

Near the end of the opinion, Alito sought to allay fears about the wide-ranging nature of his opinion. “To ensure that our decision is not misunderstood or mischaracterized, we emphasize that our decision concerns the constitutional right to abortion and no other right. Nothing in this opinion should be understood to cast doubt on precedents that do not concern abortion. “

But in his concurrent opinion, Justice Thomas said the legal rationale for Friday’s decision could be applied to overturn other major cases, including those that legalized gay marriage.

The court’s liberals noted that Thomas’s language cast doubts on Alito’s majority opinion that said the court’s decision did not mean that cases like Obergefell would be affected.

“The first problem with the majority’s account comes from Justice Thomas’s concurrence—which makes clear he is not with the program,” they wrote. “In saying that nothing in today’s opinion casts doubt on non-abortion precedents, Justice Thomas explains, he means only that they are not at issue in this very case.”

The next steps on abortion across the country would play out in a variety of ways, almost all of them resulting in abortion bans.

Several states — among them Mississippi, North Carolina, and Wisconsin — still have decades-old abortion bans on their books; with Roe overturned, those states could revert to a pre-Roe environment. Officials in such states could seek to enforce old laws, or ask the courts to reinstate them. For example, a Michigan law dating back to 1931 would make abortion a felony. Gov. Gretchen Whitmer, a Democrat, has been working to try to block that law.

Another path to banning abortion involves “trigger bans,” newer laws pushed through by anti-abortion rights legislators in many states in anticipation of the Supreme Court’s action. Some 15 states – in the South, West and Midwest – have such laws in place, according to CRR and Guttmacher, but they fall into different categories.

Some states will act quickly to ban abortion. According to a new analysis by the Guttmacher Institute, South Dakota, Kentucky and Louisiana have laws in place that lawmakers designed explicitly to take effect immediately upon the fall of the Roe precedent. Idaho, Tennessee, and Texas – where most abortions are already illegal after about six weeks of pregnancy – have similar laws, which would take effect after 30 days. Guttmacher says seven other “trigger ban” states have laws that would require state officials such as governors or attorneys general to take action to implement them.

Sue Liebel, state policy director with the anti-abortion rights group Susan B. Anthony Pro-Life America, said she expects officials in many of those Republican-controlled states to take swift action to do so.

“We have been talking to all of those about acting immediately,” Liebel told NPR. “So when that happens, let’s be ready. How do you get that back into play?”

In recent years, many states also have passed gestational bans prohibiting abortion at various stages of pregnancy. Courts have blocked many of those laws in response to legal challenges, including laws in Georgia, Ohio, and Idaho that ban abortions after six weeks of pregnancy. Now those laws may take effect immediately. So too, could a law recently enacted in Oklahoma, that makes performing abortion a felony punishable by time in prison.

“It will be a tremendous change in an incredibly short period of time,” said Julie Rikelman, senior director of litigation at the Center for Reproductive Rights. Rikelman argued the Center’s challenge to Mississippi’s abortion ban at Supreme Court this term.

A host of other restrictions could limit where, by whom, and under what conditions abortion can be provided. Some examples include laws requiring parental notification or consent for abortions involving patients who are minors; and other health regulations for doctors and clinics that many medical groups say are unnecessary, expensive, and difficult to comply with.

Legal experts say the court’s decision will pose new questions for other courts to deal with – questions about how to apply the specific language of the final ruling to individual state laws.

If Roe is indeed overturned or substantially rolled back, Rikelman, the Center for Reproductive rights attorney, predicts “legal chaos” in states across the country in the immediate aftermath of the decision.

“I think what we will see is far more litigation in the federal courts – not less litigation,” Rikelman said.

Some states such as Texas and Oklahoma have multiple abortion restrictions on the books, raising potential questions about which ones would be valid. Those laws each include different provisions and carry different penalties, adding to the potential confusion and prompting additional litigation in state and federal courts.

“That’s gonna take us back, frankly, to where we always have been. Each side tries to put their big toe right on that line and push the envelope,” Liebel said.

Battles in state courts are also likely. Some state constitutions may offer protections for abortion rights notwithstanding the U.S. Supreme Court’s interpretation of the U.S. Constitution. In Florida, for example, the American Civil Liberties Union and other reproductive rights groups are challenging a 15-week abortion ban modeled on Mississippi’s law, on the grounds that it violates privacy rights protections guaranteed in Florida’s state constitution.

Even without overturning Roe, Rikelman points to the Texas law known as S.B. 8, which took effect in September. The law, which has spawned several copycat proposals in other states, including Oklahoma, relies on individuals filing civil lawsuits to enforce an abortion ban.

Abortion bans in restrictive states will likely bleed over to states that protect abortion rights as well, Rikelman said. She notes that some state lawmakers are trying to prohibit people in other states from providing abortions to their residents.

“What we are seeing already are states and state legislators impacting even people’s ability to access abortion in places where it would remain legal,” she said.

For example, an omnibus abortion law passed by a Republican supermajority in Kentucky earlier this year includes a host of new requirements for dispensing medication abortion pills, and a provision for extraditing people from other states who illegally provide abortion pills to Kentuckians. It’s unclear how enforceable those types of laws would be.

Meanwhile, some states are trying to expand access to abortion in preparation for more patients traveling from restrictive states for procedures. Connecticut lawmakers passed legislation this year designed to protect abortion providers from out-of-state lawsuits.

“This just raises a whole host of issues,” Rikelman said. “All of those different disputes will have to be worked out in the courts” including, potentially, in the U.S. Supreme Court.

Even as abortions have now become far more restricted overall, the Guttmacher Institute reports that the long-term decline in abortions has reversed. In 2020, there were 930,160 abortions in the U.S., an increase of 8 percent more abortions than in 2017. The Institute also said that at the same time, fewer people were getting pregnant and among those who did, a larger proportion chose to have an abortion.