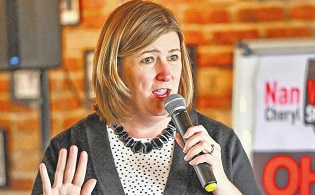 There’s a saying that “The arc of the moral universe is long but it bends towards justice. It’s often attributed to Dr. Martin Luther King Jr., although he was just quoting 19th-century minister Theodore Parker.

In fact, to a majority of Americans, it feels right now like six arrogant, out-of-touch and strikingly dishonest Supreme Court justices have grabbed hold of the arc and forcibly wrenched it backwards. For the first time in U.S. history, fundamental human rights have been taken away from a group of Americans — and a majority group at that.

The impact of overturning Roe will be far-reaching, impacting virtually every aspect of American life in a negative way: education, the economy, health care, you name it. It’s hard to list all the ways this will damage the country, ranging from loss of women’s talents to the economic cost of a flood of babies born to women with the least resources to raise them to be healthy, productive adults.

Misogynists have thrown open their closet doors with a triumphal bang. Some are openly gloating at the prospect of women’s destroyed lives, while others, such as Ohio Governor Mike DeWine, pretend it’s about “babies,” donning a pious cloak of concern as he announces, falsely, that “We are making great progress in creating an environment here in Ohio where families and children can thrive and live up to their full potential.”

In fact, there has been little progress. DeWine’s speech amounted to saying, “Now that women have no choice about giving birth, we’ll throw them some bones, even though we could’ve done this years ago, if we cared. But we don’t.”

DeWine gave every woman in Ohio the finger with his mealy-mouthed, duplicitous press conference, announcing that NOW that women are no longer in charge of their own reproductive lives, we’ll toss expectant and new mothers some minor tweaks such as “parenting classes” and “mentoring,” stuff that costs little and could’ve and should’ve been done years ago. But Ohio Republicans don’t care about the poor and working women, especially black women, who are most hurt by Ohio’s lack of concern for the wellbeing of babies and children.

DeWine did mention prenatal care and nutrition, but since the Ohio legislature is focused on cutting taxes for the state’s wealthy, it remains to be seen how significantly they’re willing to fund this or if these programs would merely be given a temporary tweak until they could get back to their main job of guaranteeing the rights of every gun.

He did NOT mention affordable childcare or paid parental leave or a living wage, economic reasons why many women choose abortion over having a child that would plunge their whole family into deeper poverty. He did mention adoption, in a state with more than 2,500 kids already waiting for adoptive homes. He’s clearly not serious about trying to relieve the physical, economic and emotional pain of women stripped of their human agency.

There is no reason to reelect Mike DeWine. With the prospect of a continuing GOP supermajority in the legislature, thanks to a thoroughly corrupt power grab of a redistricting process, his weakness and spinelessness in the face of their bullying, most recently seen in his docile signing of a dangerous bill loosening controls on guns that is the opposite of what a vast majority of Ohioans want, show he’s bereft of ideas, courage and compassion.

It’s time to get to know his Democratic challenger Nan Whaley. The former Dayton mayor is a bold, compassionate, effective leader. She threw aside the old saw about “balancing the ticket” when she chose another woman, Cuyahoga County councilor Cheryl Stephens, to be her running mate. Ohio has never elected a woman governor & in light of the dehumanizing of women by the Supreme Court, two women in leadership may be the change Ohio needs. You can learn more about Nan and Cheryl here.  The lives of women depend on it. We’ll be sharing more about Nan and Cheryl as the November election gets closer.