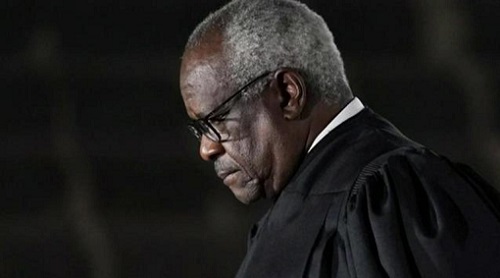 More than 700,000 people have signed a petition calling for Justice Clarence Thomas to be impeached following the Supreme Court’s decision to overturn Roe v. Wade.

The petition, made by the liberal advocacy group MoveOn, was created after the Supreme Court overturned Roe in its Dobbs v. Jackson Women’s Health Organization, and while controversy swirls around his wife, Ginni Thomas’s, political activism.

It has more than 786,000 signatures as of Friday evening.

The petition noted that Thomas was among the majority of justices who ruled that there was not a constitutional right to an abortion and alluded to his concurring opinion in that case, in which he suggested the Supreme Court should revisit cases that established the right to contraceptive access and same-sex marriage.

The petition also blasted Thomas for not recusing himself in cases relating to the Jan. 6, 2021, Capitol riot after news reports surfaced that Ginni Thomas had reached out to Arizona state lawmakers urging them to reject the 2020 election results and had contacted former White House chief of staff Mark Meadows over rejecting the last election’s outcome.

“Thomas’ failure to recuse himself warrants immediate investigation and heightened alarm. And it’s only the latest in a long history of conflicts of interest in the service of a right-wing agenda and mixing his powerful role with his conservative political activism,” a statement on the petition page reads.

“He has shown he cannot be an impartial justice and is more concerned with covering up his wife’s coup attempts than the health of the Supreme Court. He must resign—or Congress must immediately investigate and impeach.”

Some lawmakers, including Rep. Alexandria Ocasio-Cortez (D-N.Y.), have said that Supreme Court justices should be impeached if they were misleading on their answers on Roe v. Wade during their confirmation hearings.

“If we allow Supreme Court nominees to lie under oath and secure lifetime appointments to the highest court of the land and then issue — without basis, if you read these opinions — rulings that deeply undermine the human civil rights of the majority of Americans, we must see that through,” Ocasio-Cortez said on NBC’s “Meet the Press” last month