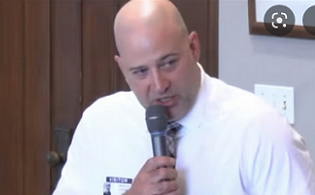 A grassroots Democratic activist won a come-from-behind victory against a sitting state lawmaker to become chair of the Cuyahoga County Democratic Party.

David Brock, a 47-year-old nonprofit worker from Cleveland’s West Park neighborhood, won the support of a majority of party central committee members in two rounds of voting on Saturday.

A progressive who has criticized the practice of making early endorsements in Democratic primaries, Brock ran on a platform of strengthening the party’s voter contact and turnout operation.

Brock told members before the vote that the party should “organize using every tool available,” from writing postcards to canvassing year-round. The party also must speak the language of people living on the economic edge, he said.

“We have to fully understand, I think, the economic realities that many Americans – too many Americans, in fact – confront every day,” Brock said, “where an emergency trip to the dentists’ office can push them over the economic cliff, or those fancy new school clothes for the children just aren’t in the cards.”

Brock and other local Democratic activists organized a voter turnout effort in the 2020. This year, he took part in a campaign to recruit people to run for central committee seats.

Rep. Kent Smith of Euclid, who is also running for the Ohio Senate this year, had also pledged to work to increase Democratic voter turnout. Whatever Democrats’ primary election disagreements, the party should come together in general elections to defeat Republicans, he said.

In the first round of voting, Brock finished second to Smith. But because Smith fell short of winning an outright majority, the vote moved to a second round.

That’s when the other candidates for chair – state Rep. Juanita Brent, political fundraiser Rob Zimmerman and Earnest Harris – dropped out and endorsed Brock. In the second round, Brock won almost 55% of the 470 committee members who participated, while Smith won about 45%.

Brock succeeds outgoing party chair U.S. Rep. Shontel Brown. He takes the reins of the party in the wake of two Congressional primaries between Brown and Nina Turner that divided Democrats and attracted millions of dollars in outside spending.

The new chair also has only a few months to prepare for the midterm elections in a year in which Republicans are expected to gain major victories. Cuyahoga County is a significant source of Democratic votes in Ohio, making it an important piece of Democrats’ statewide strategy.