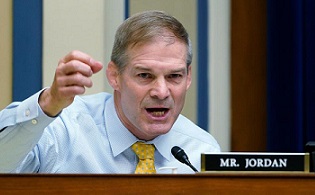 When the story of a 10-year-old rape victim crossing state lines for an abortion drew widespread attention earlier this month, some Republican politicians and news outlets dismissed it as a hoax.

In a now-deleted tweet, Republican Rep. Jim Jordan wrote: “Another lie. Anyone surprised?” Jordan had quoted a story about Ohio Attorney General Dave Yost’s office initially stating it hadn’t found any evidence to support the rape charge. Yost had also originally dismissed the story as a “fabrication.”

The story initially drew skepticism because of a lack of details released to the public. But when an Ohio man, Gershon Fuentes, was arrested Tuesday after police said he confessed to the rape, some Republican policymakers attempted instead to shift the focus onto immigration.

Jordan, along with some other Congressional Republicans who oppose abortion rights, zeroed in on Fuentes’ purported status as an undocumented immigrant.

“We didn’t know that an illegal alien did this heinous act. We never doubted the child,” Jordan told NBC News.

Jordan blamed the media, saying the lie was “the news headline … the headline from your profession. We doubted Joe Biden, which is usually a smart thing to do, but we didn’t know that this illegal immigrant had done this terrible thing. He should be prosecuted to the full extent of the law.”

Fox News hosts, including Tucker Carlson, Jesse Watters, and Laura Ingraham, also failed to correct their previous reporting on the story, which called it a “hoax” and “politically timed disinformation.”

Instead, after the news of Fuentes’ arrest broke, Carlson and Ingraham’s shows stated the 10-year-old girl “in Biden’s abortion story” was raped by an “illegal immigrant.”

“So the obvious headline here was not about abortion. It was about the crime committed against a child — ‘Who raped a 10-year-old?’ ” Carlson said. “Apparently, the rapist was an illegal alien.”

When contacted for comment, a FOX News spokesperson pointed to several reports corroborating the story and on the arrest. While Carlson and Ingraham did not address their previous reporting, other FOX News correspondents have covered developments on the story.