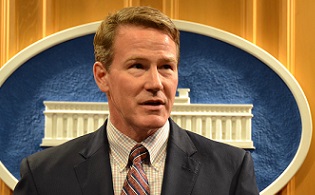 Newly-disclosed text messages suggest Lt. Gov. Jon Husted, a Republican, played a role in pushing for the passage of a nuclear power bailout bill, which is now at the center of a federal bribery case.

The texts were between then-FirstEnergy executives who were fired after the company conducted an internal investigation into the federal charges.

In a text message exchange on July 1, 2019, former FirstEnergy senior vice president Michael Dowling told former FirstEnergy CEO Chuck Jones that Husted was working on getting the legislature to pass a nuclear power plant bailout that would last 10 years.

“Just had a long convo with JHusted just now,” Dowling told Jones. “All is well. JH is working on the 10 years. He’s afraid it’s going to end up being 8. Talk later.”

The exchange happened as the Ohio Senate was considering HB6. The bill created subsidies that would collect $150 million a year from ratepayers to bailout two nuclear power plants formerly owned by a FirstEnergy subsidiary. The final bill was written to last seven years, but FirstEnergy wanted it to last for 10 years.

Husted was asked in November to describe the role he played in the passage of HB6 as it went through the committee process, the Ohio House, and the Ohio Senate. Husted said, “none.”

Watch: Husted responds to question about involvement with HB6

Gov. Mike DeWine, a Republican, and Husted have both been considered to be “State Official 1” and “State Official 2,” code names used in FirstEnergy’s deferred prosecution agreement last year. The company admitted in that agreement to bribing former House Speaker Larry Householder, a Republican, and former Public Utilities Commission of Ohio Chair Sam Randazzo, in exchange for accomplishing legislative and policy goals.

The newly-disclosed text messages confirm DeWine and Husted to be State Officials 1 and 2, respectively. The deferred prosecution agreement included a text that said State Official 2 was “fighting to the end” for an extension to the seven-year nuclear bailout.

Husted was not available for comment on the newly-disclosed text messages.

Hayley Carducci, Husted’s spokesperson, released a statement which said, “There is nothing new here. The Lt. Governor has long maintained that saving the nuclear power plants was a priority as they provide the vast majority of the state’s zero-carbon energy. He has been on the record with that position both as a candidate and as Lt. Governor. The Lt. Governor has no vote, nor the capacity to sign bills into law. This kind of advocacy is well within his responsibilities as a public official, and, as we know, the bill was ultimately passed with bipartisan support.”

When asked specifically about Husted’s comments in November where he denied playing any role in HB6, Carducci referred back to the statement.

The text messages were included in a motion filed by the Ohio Consumers’ Counsel with the PUCO. The OCC is asking for a subpoena to depose Jones in an ongoing case which includes the possible “misallocation of costs” related to HB6.

The texts do not suggest Husted was part of any wrongdoing and the DeWine administration has said the office has never been the focus of the investigation.

FirstEnergy, Cespedes, and Longstreth have admitted to the charges. Clark died by suicide in March 2021. Borges has pleaded not guilty as did Householder who has said he never accepted a bribe and he did not “sell” legislation.

The trial for Householder and Borges is set to begin January 2023.