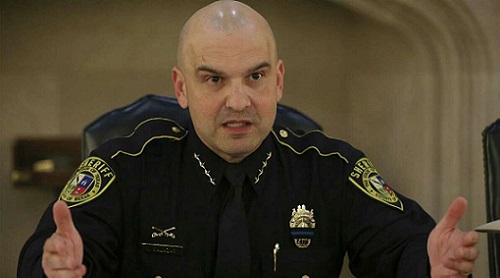 Authorities have confirmed they are opening a criminal investigation into the individuals who “lured” approximately 50 migrants from the migrant resource center in San Antonio to be flown to Martha’s Vineyard at Florida Gov. Ron DeSantis’ request.

Bexar County Sheriff Javier Salazar confirmed the investigation during a press conference Monday “to clear the air for everyone,” alleging that 48 migrants were “lured under false pretenses” to stay at a hotel for a couple of days, shuttled to a plane, flown to Florida, and eventually transported to Martha’s Vineyard, where they had been promised work and solutions to other problems.

A number of migrants have claimed to have been approached and paid $200 cash by a mysterious woman called “Perla” to recruit people to board a plane to Martha’s Vineyard on Wednesday. By Friday the migrants were being transported from the island’s lone shelter to temporary housing at Joint Base Cape Cod in Buzzards Bay—off Martha’s Vineyard entirely.

Salazar did not mention any specific suspects but said he had “the names of some suspects involved who we believe are persons of interest at this point.” He said he won’t part with the names but that “everybody on this call knows who those names are already.”

DeSantis claimed responsibility for the two flights that ferried the migrants to the upscale Massachusetts island as part of what the Republican governor’s office called part of efforts to “transport illegal immigrants to sanctuary destinations.”

Salazar, who is a Democrat, said he felt bothered by the news and is working with nongovernmental organizations, media, and advocacy groups to help the migrants with representation.

He said he has spoken to one attorney who is representing a number of migrants as part of the investigation to discover if this was “a strictly predatory measure,” noting somebody “hunted them down, preyed upon them… for the sake of political theater. I believe people need to be held accountable for it.”

“What infuriates me the most about this case is that here we have 48 people who are already on hard times, they are here legally in our country at this point, they have every right to be where they are, and I believe they were preyed upon,” Salazar said, alleging the migrants were “exploited and hoodwinked” for nothing more than “political posturing.”

Salazar said he was unable to definitely provide a statute or criminal activity that was broken “but what I can tell you what was done to these folks is wrong.” He said he wanted to find out “sooner rather than later” what charges, if any, will apply and to whom.

He labeled the allegations he has heard as “absolutely distasteful, disgusting, and an abuse of human rights.” He said he was enraged by the news and said he believed criminal activity was “involved,” though had not yet spoken with any migrants yet.

Salazar said there may be parallel laws broken on the federal side and welcomed the White House to “give me a call.”