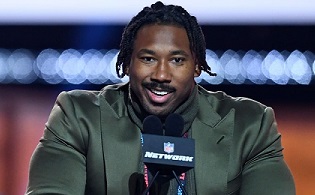 While Ohio State Highway Patrol troopers investigate how Myles Garrett flipped his Porsche on a Medina County road last week, court records show the Browns star has been stopped for speeding at least seven times since joining the team in 2017.

Additionally, multiple tickets show Garrett was driving over 100 mph, including one 24-hour period in which Garrett was stopped twice – once for driving 120 mph and a second time for 105.

The infractions happened Sept. 24-25, 2021 on Interstate 71 in Medina County, where the speed limit is 70 mph, according to Medina Municipal Court records. Garrett was fined $267 and $287 for the infractions.

Elsewhere, Akron Municipal Court records show Garrett was cited for driving 100 mph in a 65 mph zone of Interstate 77 in May of 2020 by Summit County sheriff’s deputies.

Garrett, who was driving a Porsche 911, was also charged with reckless operation of a motor vehicle and violating a turn signal, records show.

He was allowed to plead guilty to speeding, while the other charges were dismissed. Garrett was fined $308, records show.

Garrett was also stopped by North Olmsted police in 2018 for speeding and having a taillight violation.

Details of that offense were handled in the city’s Mayor’s Court and were not immediately available, a city official said Wednesday.

Garrett, 26, was also stopped by state troopers in Delaware County in 2018 for speeding. The case was dismissed after Garrett agreed to pay $150 and attend a traffic safety class, records show.

Troopers also stopped Garrett in December 2018 on I-71 in Strongsville for travelling 77 mph in a 60 mph zone.

In Berea, near the team’s facilities, police also stopped Garrett on two occasions – once for a faulty muffler in June of 2018, plus a taillight violation in December 2018.

In all cases, Garrett was fined. It is unclear if the infractions were reported to Texas, where Garrett is licensed to drive. He does not have an Ohio license.