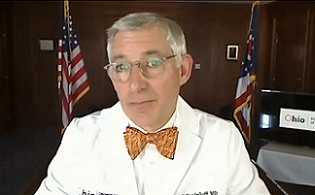 The nation was shocked when a 10-year-old Ohio rape victim was forced to obtain an abortion in Indiana after the U.S. Supreme Court overturned Roe v. Wade in June.

But in the months since, court records detailed at least two other minors who traveled out of state for abortions because Ohio banned doctors from performing the procedure after cardiac activity was detected.

How common are these abortions? New data from the Ohio Department of Health offer some insight: In 2021, 538 children ages 17 and younger legally obtained abortions in Ohio, including 57 who were younger than 15 years old.

That represents 2.5% of the 21,813 abortions performed in Ohio last year. The state does not track how many abortions were performed on victims of rape and incest. The age of consent in Ohio is 16 years old.

Dr. Catherine Romanos, with the Women’s Med Center in Kettering, near Dayton, Ohio, performs a sonogram on a woman from Kentucky. The number of abortions performed in Ohio increased in 2021, the year before the U.S. Supreme Court overturned Roe v. Wade.

Here’s what you need to know:

Abortions performed in Ohio increased 5.9% in 2021

“What the last few months has really brought into focus is that each of these numbers is a person, a person who needed abortion care and was able to get the care they needed,” Pro-Choice Ohio deputy director Jaime Miracle said in a statement. “For several months in 2022, Ohioans didn’t have that option.”

The full effect of Ohio’s abortion restrictions won’t be known until next year’s report. In the meantime, Republican lawmakers are working on a near-total abortion ban, which is expected to pass following the November elections.

“We are confident that Ohioans are on the right track to ending abortion now that the United States Supreme Court has overturned Roe,” Ohio Right to Life President Mike Gonidakis said in a statement.

For the second year in a row, Black Ohioans had more abortions than their white counterparts.

Most abortions occurred before 9 weeks

About 60% of abortions performed in 2021 occurred before nine weeks gestation. Very few − 156 out of more than 21,800 abortions − were performed after 21 weeks into pregnancy.

The state did not keep track of how many abortions were performed after cardiac activity was detected in 2021, because that law was on hold by a federal court. In court filings, abortion clinics reported that abortions dropped dramatically in the weeks after Ohio’s six-week abortion ban took effect.

Who obtained abortions in Ohio?

The person who obtains an abortion in Ohio might look different than you imagine. Residents of each of Ohio’s 88 counties obtained abortions in 2021, ranging from two in Noble County to 4,839 in Cuyahoga County.

Education levels varied among those who obtained abortions last year. The largest group at nearly 39% had a high school diploma or a GED. About 9.4% of those who had an abortion in 2021 had a bachelor’s degree.

Jessie Balmert is a reporter for the USA TODAY Network Ohio Bureau, which serves the Columbus Dispatch, Cincinnati Enquirer, Akron Beacon Journal and 18 other affiliated news organizations across Ohio.