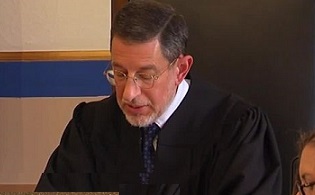 Ohio’s new “heartbeat” abortion law, outlawing the procedure after six weeks of pregnancy, remains on hold Friday as a Hamilton County judge blocked a ban on virtually all abortions.

It is “simply wrong” to argue that a “right does not exist because it is not specifically listed in the (U.S.) Constitution,” Jenkins said, according to the Associated Press.

Jenkins granted a temporary restraining order Sept. 14 at the request of the Kettering Woman’s Center and other pro-choice organizations. News Center 7′s Mike Campbell was in the courtroom Friday as the judge presided over a preliminary injunction hearing on the matter.

Michelle Diamond, one of half-dozen lawyers arguing against the state’s six-week abortion ban, said allowing the ban to go into effect would “do devastating damage to women in Ohio.”

The medical director of Planned Parenthood of Ohio, who chose not to be photographed, claimed the law made women across the state despondent when they couldn’t receive care.

“Sometimes they would get desperate and try to figure out how to take matters into their own hands or threaten to harm themselves,” the director said in court.

Lawyers for the State of Ohio argued that the law is fair, includes exceptions and after being passed by lawmakers and signed by the governor, should become that law in Ohio. They also said pro-choice groups and clinics have not shown that the law does irreparable harm to them.

The state’s lawyers also called on a professor of biomedical ethics, who argued that abortion is not healthcare.

“Deliberate induced abortion, it separates one human organism from another and there is no disease being treated,” Dr. Dennis Sullivan said.

“We are thrilled with this second major victory and relieved that patients in Ohio can continue to access abortion as we work to fight this unjust and dangerous ban in court. The preliminary injunction will be in place for the duration of our case, which means abortions will be legal in Ohio for a period much, much longer than the temporary restraining order granted. This court ruling will provide significant relief to Ohio patients and clinics. We’ve already had a glimpse of the harm caused by Senate Bill 23 when it was in effect this summer, and we can’t go back. Ohioans deserve far better than the chaos and confusion that we’ve seen since the U.S. Supreme Court stripped us of our federal constitutional right to an abortion. We will continue to use every tool at our disposal to fight for and protect Ohioans’ rights as guaranteed by the Ohio Constitution. We will now work to secure a permanent injunction.”

“Dayton Right to Life and other statewide leaders were in the courtroom for today’s hearing. It was clear from the beginning Judge Jenkins was going to block the law and the will of the people. This is not justice, this is judicial activism.”

Democratic gubernatorial nominee and former Dayton Mayor Nan Whaley had this to say:

“Too many women have already suffered under Governor Mike DeWine’s extreme abortion ban. While this ruling is a victory and without doubt will save women and girls from the difficult decision of choosing between accessing health care or leaving the state, we know that this is not the end – DeWine has promised anti-choice groups that he’ll go as far as possible in prohibiting abortion in Ohio. The only way to guarantee a woman’s freedom to make her own health care decisions is to elect a pro-choice governor who will work to codify these protections in the Ohio Constitution. Our freedom is at stake. Abortion is on the ballot this November.”

“We think this is the correct decision. We believe Dave Yost will appeal it and continue his attacks on reproductive rights and freedoms for women in Ohio. As Ohio’s next Attorney General, I will dismiss this appeal, and confirm once and for all the constitutionality of all women’s reproductive rights and abortion care in this state.”

“We will wait and review the judge’s actual written order and consult with the Governor’s administration as far next steps.

We’ll continue to update this report as information becomes available.