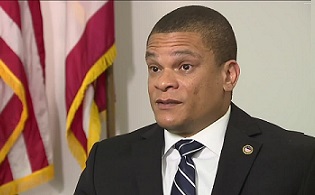 The city cites citizen safety as a reason for shielding information, but has no policies on use of surveillance technology.
This article was published in partnership with The Marshall Project – Cleveland, a nonprofit news team focused on the Greater Cleveland area’s criminal justice system.

Cleveland has spent at least $7 million to dot the city with about 1,500 surveillance cameras since 2007. It’s poised to invest nearly $4.7 million for 300 more and fix or replace nearly 40 that are old or damaged.

Unlike some other cities, Cleveland officials have refused to share with taxpayers two key pieces of information: where the cameras are, and how they’re used. Some have facial recognition and other capabilities that, if used, could compromise privacy.

“The cameras are paid for by the public,” Council member Michael Polensek told The Marshall Project. “When they go up, everybody knows where they are at. What’s the secret?”

The city has no policy against sharing camera locations, said Karrie Howard, director of public safety. He said the city is prioritizing safety of residents over releasing the information.

“Releasing the locations and capabilities of the cameras has the potential to compromise their effectiveness and will hinder investigations,” Howard said in response to emailed questions.

The stance is at odds with new Mayor Justin Bibb’s commitment to greater transparency and accountability, particularly with the police department.

A spokeswoman for Bibb did not respond to specific follow-up questions, other than noting the mayor was aware of Howard’s responses.

No progress on policies as police expand technology use

The absence of an open dialogue about how that technology will be used, what information is being collected and retained, and how it would be monitored for misuse seems inconsistent with the spirit of agreements between Cleveland and the U.S. Department of Justice, according to a report released in May by the city’s Community Police Commission. The commission, which was created to increase oversight and engage residents as part of a federal consent decree, pointed to a lack of vetted policies describing how the tools could be used constitutionally.

“It is surprising that with this administration we aren’t seeing some greater push for transparency on this stuff,” said Brian Ray, who directs the Center for Cybersecurity and Privacy Protection at Cleveland-Marshall College of Law. “I would have thought this administration would be a little different.”

Ray, who served as an advisor for the community police commission report, said it’s critical that residents know where cameras are and what law enforcement is using them for — at least to track potential discrimination in how they are used by police.

The issue of transparency was also raised recently by Cleveland’s consent decree monitoring team. A new report notes the department had yet to provide a draft of a policy on how it would release records, data and information to the public. The monitoring team called such policies “an important part of police legitimacy and demonstrations of transparency for the community.”

Though Bibb campaigned heavily on both transparency and police accountability, he has yet to say how he’ll balance the two.

Bibb and police brass announced in May that the city would expand its reliance on police surveillance technology by using a $355,400 state grant to buy two drones, 100 license plate reader cameras and five portable surveillance cameras. The concerns about transparency, the lack of policies and privacy issues were not addressed.

Council members, including those who enthusiastically support the use of cameras to deter crime or apprehend suspects, have questioned city officials about camera locations and surveillance capabilities.

Council member Joe Jones publicly pressed for information on the use of facial recognition technology during an April committee meeting.

The cameras can be programmed to recognize things — man, woman, dog, car, truck — and to match faces against existing databases, Froilan Roy C. Fernando, the city’s chief innovation and technology officer, explained during that committee meeting.

“And are we deploying the facial recognition piece?” Jones asked.

Howard cut in: “Councilman, what I would like is, if possible, if we could speak on the capability of our camera system privately.”

The city has also denied public records requests for camera locations. Last year, Cleveland Documenters, a community-based journalism group, requested the locations of more than 1,200 cameras that were placed around the city as part of the “Safe Smart CLE” initiative.

The city refused and said the locations were exempt from public records law as “specific confidential investigatory techniques or procedures or specific investigatory work product.”

Officials did release a breakdown of the number of cameras placed in each ward and have said many of the cameras are placed near recreation centers and main corridors with existing infrastructure to support the cameras.

Officials told council members that neighborhoods with higher instances of crime often have fewer cameras. That’s because the cost of camera installation in neighborhoods that lack fiber-optic cable or advanced wireless networks can cost 10 times as much because the infrastructure needs to be built.

“I don’t get it,” Slife said. “For me, the responses have defied logic.”

Polensek said residents he spoke with are overwhelmingly in favor of using surveillance cameras and want more in areas where crime is higher, businesses are targeted or illegal dumping is prevalent. He said he’s heard no fears about privacy issues or rights violations, but does believe information on how the city uses the cameras should be public.

City Council President Blaine Griffin, who for more than a decade responded to violent crimes while directing the city’s community relations board, said he understands the trepidation police have about revealing the locations of the cameras.

In Griffin’s view, the cameras are more investigatory tools, like wiretaps used to monitor drug dealing or devices to track homicide suspects, and less to prevent or deter crime.

“The challenge is making sure that you have transparency but also not tipping off the people you have surveillance on,” Griffin said.

The city, however, should share the types of cameras it purchases and what technologies it uses, Griffin said, because some — like license plate readers — can be misused or weaponized.

“It’s common. I doubt it’s legal,” said Brian Hofer, chair and executive director of Secure Justice, an Oakland, California, nonprofit that fights what the organization views as abuses of power and overreach by governments and corporations, particularly when it comes to surveillance technology.

Hofer, who chairs Oakland’s Privacy Advisory Commission, has worked with more than 20 cities to vet contracts, create policies or legislation or form commissions to oversee the use of surveillance technology by law enforcement.

The work isn’t about banning the use of all surveillance technologies, he said, but about residents understanding how they work and having a say in how they are used.

In Oakland, and other jurisdictions where Hofer has helped create technology-vetting frameworks, residents will often be okay with controversial or powerful technology used in limited situations, such as solving a violent crime. But they won’t ever want that same technology to be used to investigate a petty theft, he said.

If residents don’t know the specifications or where these things are being located, he said, it’s impossible to really make that informed decision of what meets community norms or standards.

Hofer has encountered pushback from police, who say that being too transparent could allow people to disable or evade the technology.

“Do you really think that the smash-and-grab guy is watching city council agendas and downloading your documents?” he said. “It’s just not happening.”

Cities such as Baltimore, Pittsburgh and Washington, D.C., use camera networks and are routinely more transparent about locations or policies.

For years, Baltimore has maintained a network of hundreds of closed-circuit security cameras. Anyone with a smartphone or computer can search a city website to find the location of each of its hundreds of cameras.

In 2021, the Pittsburgh Bureau of Police updated its nine-page policy for the “Public Safety Camera Program.” The city originally created the policy, accessible online, in 2016.

Pittsburgh does, however, have a city law that requires some transparency — each camera is paired with a street level sign telling residents a camera is in use.

The Los Angeles Police Department has built in layers of transparency and oversight for how the police department uses and shares information about cameras and other surveillance technologies. That’s partly due to its consent decree, which helped transform the LAPD from a militaristic agency to one that is focused on community policing, Los Angeles Police Commissioner Steve Soboroff told The Marshall Project.

Critics who are concerned about privacy abuses don’t like some policies, he acknowledged, but the policies are available for public review.

On Aug. 30, the Los Angeles Police Commission approved a new contract for up to $3 million to upgrade its existing network of 214 surveillance cameras posted across the city.

During a presentation, Office of Constitutional Policing & Policy Cmdr. Steve Lurie told the commission that 104 cameras are mounted at intersections and another 110 are mounted on city buildings.

No facial-recognition software is used with the camera system, Lurie said. During the public meeting, he also presented a geographic breakdown that showed the street locations among police districts. Lurie told The Marshall Project in some cases, locations are not disclosed for investigative reasons.

Los Angeles police Chief Michel Moore told the commission any new installation location is subject to public review by the Los Angeles Police Commission, which recently adopted new rules for how the city can use an array of available crime fighting technologies.

Under its new policy, the LAPD must submit a detailed proposal to the commission before deploying a particular technology, spelling out whether any data will be collected on people and for how long it will be kept, any infringements on people’s privacy and civil rights, and what safeguards are in place to guard against misuse, the Los Angeles Times reported.

LAPD is also required to report annually to the commission about its compliance to the policy.

In Cleveland, the Community Police Commission’s report recommended the city move toward a similar vetting strategy and public disclosure of a wide range of surveillance technologies, which include software or electronic devices and data systems designed to collect or retain information on people.

“How can you gain the trust of any community for anything or other law enforcement agencies, frankly, with decades-old practices of keeping everything shielded?” Soboroff said. “The idea of going opposite of the best practices in a business that is built on perception, trust and transparency is wrong.”