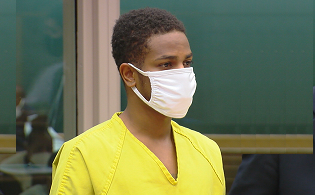 Outside the Westside headquarters of the Cleveland Police Patrolmen’s Association, a group of high-profile Republicans ended a weeklong bus tour in support of a constitutional amendment that would change the way bail is set.

Weingart said the amendment, which requires that judges consider a defendant’s potential threat to public safety before setting a cash bail amount, is an easy choice.

“How could anybody not vote yes on Issue 1?” Weingart said, while recounting a conversation he had with his wife while she baked chocolate chip cookies. “How could anybody be opposed to taking into account the safety of the community when setting bail?”

The majority opinion sided with DuBose, who was charged with murder, and found setting DuBose’s bail with the intent of keeping him in jail until trial violated rules established by the Supreme Court.

“The issue is that the amount set by the trial court was clearly calculated to be at a level that DuBose cannot possibly afford to pay,” wrote Justice Michael Donnelly in a concurring opinion.

Donnelly went on to write that state law sets out a process for holding defendants without any bail, if prosecutors can show there is a high likelihood the accused committed the crime and poses a risk.

The three Republicans who dissented in that case all joined the bus tour in support of Issue 1. Justices Pat DeWine and Pat Fischer are up for reelection. Justice Sharon Kennedy is running for chief justice.

All three said the current bail system, based on whether a person is likely to appear in court, puts communities at risk.

“And those who can afford to leave, do,” Kenneday said. “A ‘yes’ on Issue 1 allows communities safety once again.”

Issue 1 requires judges to consider several factors when setting bail, including the perceived threat to the public posed by a defendant. The current system favors other measures to ensure public safety, like home confinement, GPS monitoring and orders to have no contact with alleged victims, and limits the use cash bail.

Justice Pat Fischer said the option under current state law meant to replace high bail amounts like the one in the DuBose case – convincing a judge to hold a potentially dangerous person without bail – did not go far enough.

“It’s limited by the state constitution to high level felonies and a high level of evidence already,” said Fischer.

Both candidates for governor, Democrat Nan Whaley and Republican Mike DeWine, have come out in support of Issue 1. Neither the Ohio or Cuyahoga County Democratic party organizations have taken a position on it.

The ACLU of Ohio has campaigned against Issue 1, arguing it doesn’t address public safety and reinforces a system where a person’s freedom is determined by their ability to pay.

ACLU of Ohio Policy Counsel Patrick Higgins said, even if it passes, high bail amounts would still be subject to legal challenges because “public safety” is not clearly defined and the state and federal constitutions already prohibit excessive bail.

“Every election cycle we see public safety come up because it’s a quick talking point,” Higgins said. “We don’t think Issue 1 actually meets that end goal of making the public any safer.”

Higgins cited the hypothetical example of two people who committed the same crime and pose the same risk, if one person has enough money to post bail, they get to go home and the other doesn’t.

Jeremy Cherson of the Bail Project, a nationwide nonprofit that assists with cash bail and has a branch in Cleveland, says they’ve found that few people in their program commit crimes after release from pretrial detention and show up to around 90 percent of court dates.

“There’s no reason to go out and say we need to expand the use of cash bail,” Cherson said. “Moving in the direction of using cash bail to address concerns about public safety is a step in the wrong direction.”